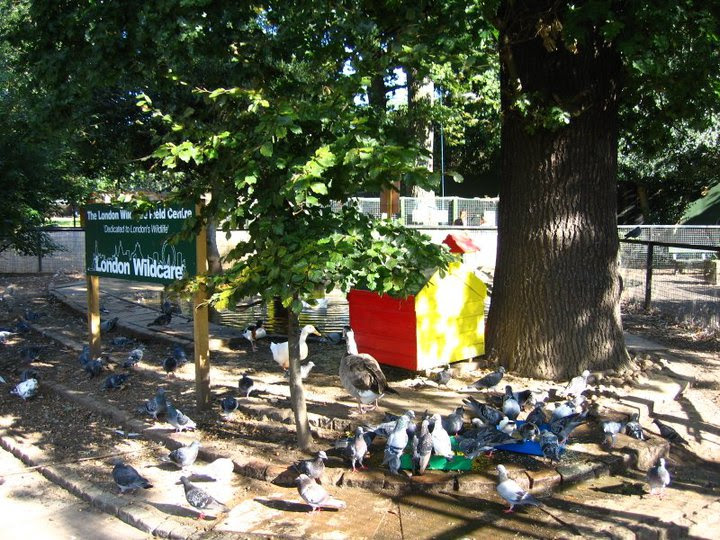 I always loved Ealing, which is the greenest Borough in London, with many parks, cafes and holistic centres. I relocated to Ealing in 2004, after I lived in Cork, Ireland, for a couple of years.

After settling in the area, I started exploring and looking for ways to contribute to the local community. I found an animal rescue centre inside Walpole Park and I noticed that they were looking for volunteers. I applied straight away and my application was accepted. We agreed that I would work once a week on a Sunday morning. At that time I had a Monday-Friday job at the local Council, so it was perfect for me.

The centre had different enclosures with an Albino squirrel and a red squirrel, a tortoise, different birds, and a larger cage for Merlin the Owl. Outside there was a large pond, with many ducks, swans, and a fenced area with three foxes.

My tasks included cleaning the enclosures, feeding the animals and welcoming members of the public to the centre.

I liked all the animals, but Merlin was (of course) my favourite. He was fascinating. That was the first time I had ever seen an owl. Sometimes he would look straight in my eyes as if he could read my thoughts. I was asked to feed him frozen cheeks, which he seemed to enjoy very much, but I did not particularly enjoy that part of the job, it was a bit disgusting for me.

However, when I was inside his cage, it was pure magic. I could really feel a deep connection with him. It is so true that owls are magical creatures. I felt something that went well beyond words.

At the beginning I would try to trick him, pretending of giving him food so that I could touch his wings or head. I know, it was not very respectful, but I suppose I desired a closer connection. I left him alone thought as he would bite my fingers, but without hurting me. It was a friendly bite and I liked to think that it was a sign of affection.

With time we built a closer relationship, and after several months the manager of the centre allowed me to have Merlin on my arm. He stayed there still for a while, turning his head 180 degrees, before he would fly back to his pedestal inside the cage. That was a major step forward in our relationship.

I had been there for over a year now and one day I was told that the centre would have to close because they had no money left in the budget to continue running it. The news was devastating for many people. The animals would be relocated to a bigger centre near Watford, North/West London.

Volunteers at the animal rescue centre were very committed, they were all lovely and they loved the animals. It was very sad news for the residents and their children, who could not longer enjoy the experience when visiting the centre. And of course, it must have been very distressful for all the animals to be relocated from their home.

Towards the end, just before the centre closed, Merlin was very friendly towards me. He used to wait for me inside the cage and look at me through the fence. When I opened the door, he would fly on my shoulder, and stay there until I left the enclosure. I could walk around with him on my shoulder and he did not move at all, only his head. Sometimes he would climb to the top my head, and keep some of my hear for himself when he had left. Unfortunately I cannot find any photo of him, I think that back then I didn’t not use to have smartphone and photos were all taken with a digital camera.

I like to think that Merlin is free to fly wherever he wants, so are all the other animals of the animal rescue centre.

When I started working with energy a few years later, I felt his presence many times. It was not like a vision of him flying, nor it was him communicating with me. It was more like a sense of deep connection, the same feeling I had when he used to fly and stay on my shoulder. Something that goes beyond the five senses. It still happens at times, and it is very reassuring and loving.

I think that Merlin played an important part in my initiation into the healing world. Maybe he was like a gate keeper, he took me through that initiation. Owls are usually associated with clairvoyant abilities and I definitively developed them after that encounter. Everything evolved for me from there.

Most of the times this is how it happens. Perceptions, connections, intuitions, insights permeate our daily existence in a very gentle, subtle way. We do not have to look for dramatic encounters, multi-coloured dreams, or winged messengers.  We just need to pay attention to simple things in our live, and as we do, things will be revelated to us in a very natural way.

Giancarlo is a qualified Healer, hypnotherapist and Reiki Teacher. He runs Reiki courses and offers consultations in person and online. Read more.