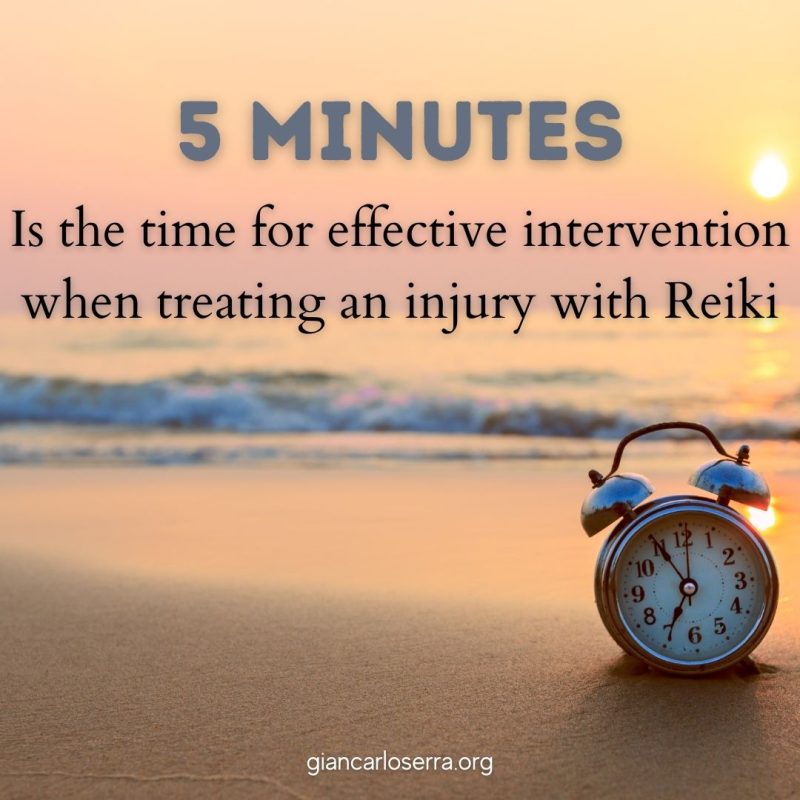 Receive Reiki Within 5 Minutes in An Emergency

Reiki can be very effective when used to treat injuries requiring emergency treatment. However, the time of effective intervention is 5-10 minutes.

John Harvey Gray and Lourses Gray write in their book Hand To Hand:

“Our experience and observations have shown us that, after an injury of any kind such as a cut, a bruise, a burn, a fracture, there is about a five-ten minute window before the cells disorganise. This is the place for a highly effective intervention with Reiki”

Benefits of applying Reiki within the 5-10 minute window – time of effective intervention.

– Cells have a memory of how they were before the accident. Reiki healing supports the cells affected by the injury in reverting to their original healthy form and condition.

– Pain, swelling, disfigurement and other consequences of the injury are minimised.

– The overall time of recovery is shortened.

In their book, John Harvey Gray recalls an event that happened two or three weeks after he had been attuned to First Degree Reiki by Hawayo Takata.

John and Beth were returning from visiting a friend in a Redwood City hospital. They went to their car in the parking lot where he held the car door open for Beth. When she got in, he closed the door on her hand.

When he opened the door, releasing her hand, Beth fainted. He held her inside the car until she recovered consciousness.

Then he went around to the driver’s side, got in and held her injured hand for about 40 minutes. When the almost unbearable pain subsided, he continued to hold her hand for several minutes more. The pain eased and then went away.

When he took his hands away, her hand was completely well, no black and blue. She had flex in her knuckles with only a little black mark on a fingernail. It was as though nothing had happened. This was complete evidence for the two of them that the Reiki system really worked. He knew that Reiki flowed through him even though he was a beginner.

This was a point of awakening for him, and the force of that awakening has carried on through many years.

“When this happened (the state of enlightenment), he (Mikao Usui) was filled with excitement and went running down the mountain to tell his Zen master of his great good fortune.

On his way down he stubbed his toe on a rock and fell down. And in the same way anyone would do, he placed his hands over the toe, which was in pain.

As he did this, healing energy began flowing from his hands all by itself. The pain in his toe went away and the toe was healed.“

Excerpt from The History of Reiki, William Lee Rand, The Healing Touch.

“If you were to wait for about half an hour after an injury and then treat it with Reiki, significant improvement could occur but not to the extent possible if treated during this narrow emergency window.

We have seen cuts close up and become scratches, bruising that doesn’t take place, very little inflammation, no formation of scar tissue later and burns disappearing without even a pink spot, all from a response within that five-minute window”.

“The Universe in which we find ourselves and from which we can not be separated is a  place of Law and Order. It is not an accident, nor chaos. It is organized and maintained by an Electro-dynamic Field capable of determining the position and movement of all charged particles.”  – H. S. Burr

How is it that our bodies know to be shaped as they are?

Why do the wings of birds differ from the branches of trees?

What is directing all of the forms in nature to take on their unique, identifiable shape?

One researcher, Dr. Harold Saxton Burr, made it his life’s mission to discover what force was not only directing this phenomenon, but also holding everything in its rightful shape.

Burr’s work describes an invisible, intangible field of energy that he refers to as the Fields of Life, or L-fields, for short. Essentially, life folds are a field of subtle energy that he equates to a jelly-mold, that shape us into a particular form. Just as a jelly-mold can be damaged, so can our energetic field, causing us to lose our original shape, and fall victim to illnesses and imbalances.

Dr. Harold Saxton Burr found that the L field or human life-energy field precedes and serves as a kind of mold or form for the physical cells and tissues.

John Harvey Gray and Lourses Gray’s findings are consistent with current the knowledge we have of the existence of the etheric double and the etheric plane.

Giancarlo is a fully qualified Spiritual Healer, Reiki Master, Hypnotherapist and Past Life Regression Therapist. He is a Consultant Expert Healer of the College of Psychic Studies in London.

He is a Master Teacher member of the UK Reiki Federation and registered with the Complementary & Natural Healthcare Council, Federation of Holistic Therapists, the Spiritual Regression Therapy Association and the General Hypnotherapy Register. Read more.