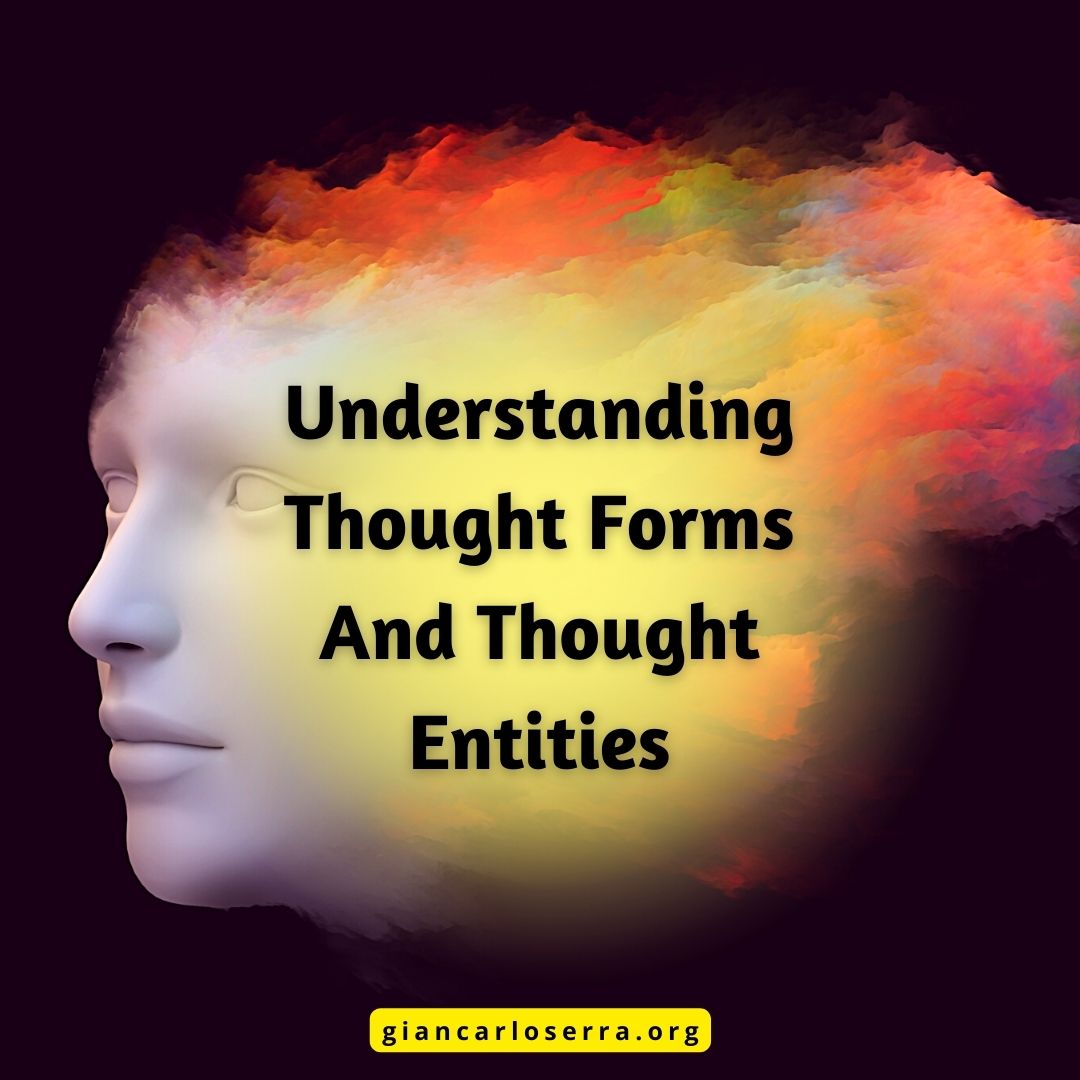 Thought-Forms: A Record of Clairvoyant Investigation is a theosophical book compiled by the members of the Theosophical Society A. Besant and C. W. Leadbeater. It was originally published in 1901 in London.

The authors explain how they believe that ‘thought are things” and the book contains colour pictures of visualization of thoughts, experiences, emotions and music, that the authors said are created “in subtle spirit-matter“.

The authors affirm that “the quality” of thoughts influences the life experience of their creator, and that they “can affect” other people.

The drawing and painting of the Thought-Forms observed by Mr Leadbeater and A. Besant has been done by three friends — Mr John Varley, Mr Prince, and Miss Macfarlane.

The Two Effects Of Thoughts

“Each definite thought produces a double effect — a radiating vibration and a floating form. The thought itself appears first to clairvoyant sight as a vibration in the mental body, and this may be either simple or complex. If the thought itself is absolutely simple, there is only the one rate of vibration, and only one type of mental matter will be strongly affected.

The mental body is part of the aura, which is a beautiful field of ever changing energy patterns that completely surrounds all living things. The aura is composed of several layers with the denser layers of energy being closest to the human body and the finer and higher vibrations furthest from the physical body.

The aura is created by all of your thoughts and feelings, conscious and unconscious as well as the energies flowing through the physical body. Your state of health is reflected in the aura as well as affected by the condition of the aura and, in fact, many feel that the original cause of both illnesses and health is in the aura.

Highly sensitive clairvoyants can see or be aware of the aura in great detail and other people can see some parts of the aura. Some scientific instruments are now able to measure and photograph aspects of the aura (if you Google Kirlian Photography you can find some interesting sites).

The four levels of the aura closest to the body are the etheric, the emotional, the mental and the spiritual layers.

It’s interesting to notice that clairvoyants have identified the mental body, and not the brain, being the ‘place/space’ where thoughts are originated.

“The mental body is composed of matter of several degrees of density, which we commonly arrange in classes according to the sub-planes. Of each of these we have many sub-divisions, and if we typify these by drawing horizontal lines to indicate the different degrees of density, there is another arrangement which we might symbolise by drawing perpendicular lines at right angles to the others, to denote types which differ in quality as well as in density.

“There are thus many varieties of this mental matter, and it is found that each one of these has its own especial and appropriate rate of vibration, to which it seems most accustomed, so that it very readily responds to it, and tends to return to it as soon as possible when it has been forced away from it by some strong rush of thought or feeling.“

“When a sudden wave of some emotion sweeps over a man, for example, his astral body is thrown into violent agitation, and its original colours are or the time almost obscured by the flush of carmine, of blue, or of scarlet which corresponds with the rate of vibration of that particular emotion.“

“This change is only temporary; it passes off in a few seconds, and the astral body rapidly resumes its usual condition. Yet every such rush of feeling produces a permanent effect: it always adds a little of its hue to the normal colouring of the astral body, so that every time that the man yields himself to a certain emotion it becomes easier for him to yield himself to it again, because his astral body is getting into the habit of vibrating at that especial rate.”

The above excerpt explains how important is to pay attention to the clarity, intensity and quality of our thoughts and intentions.

“The majority of human thoughts, however, are by no means simple. Absolutely pure affection of course exists; but we very often find it tinged with pride or with selfishness, with jealousy or with animal passion. This means that at least two separate vibrations appear both in the mental and astral bodies—frequently more than two. “

“The radiating vibration, therefore, will be a complex one, and the resultant thought-form will show several colours instead of only one.”

“Again, like all other vibrations, these tend to reproduce themselves whenever opportunity is offered to them; and so whenever they strike upon another mental body they tend to provoke in it their own rate of motion. That is—from the point of view of the man whose mental body is touched by these waves—they tend to produce in his mind thoughts of the same type as that which had previously arisen in the mind of the thinker who sent forth the waves.“

“It should be understood that this radiating vibration conveys the character of the thought, but not its subject.”

The Quality Of Our Thoughts

“This thought-form may not inaptly be compared to a Leyden jar, the coating of living essence being symbolised by the jar, and the thought energy by the charge of electricity. If the man’s thought or feeling is directly connected with someone else, the resultant thought-form moves towards that person and discharges itself upon his astral and mental bodies. If the man’s thought is about himself, or is based upon a personal feeling, as the vast majority of thoughts are, it hovers round its creator and is always ready to react upon him whenever he is for a moment in a passive condition.”

“For example, a man who yields himself to thoughts of impurity may forget all about them while he is engaged in the daily routine of his business, even though the resultant forms are hanging round him in a heavy cloud, because his attention is otherwise directed and his astral body is therefore not impressible by any other rate of vibration than its own. “

“When, however, the marked vibration slackens and the man rests after his labours and leaves his mind blank as regards definite thought, he is very likely to feel the vibration of impurity stealing insidiously upon him. If the consciousness of the man be to any extent awakened, he may perceive this and cry out that he is being tempted by the devil; yet the truth is that the temptation is from without only in appearance, since it is nothing but the natural reaction upon him of his own thought-forms.“

The three major principles that govern the creation of thoughts are:

The authors define the following three classes of thought-forms:

1. That which takes the image of the thinker.

2. That which takes the image of some material object.

3. That which takes a form entirely its own, expressing its inherent qualities in the matter which it draws round it.

The following are a few examples of the pictures included in the book:

It’s like “a cloud of red-grey crescents.” Sudden Fright appears as a series of grey and red crescent shapes bursting out of the aura.