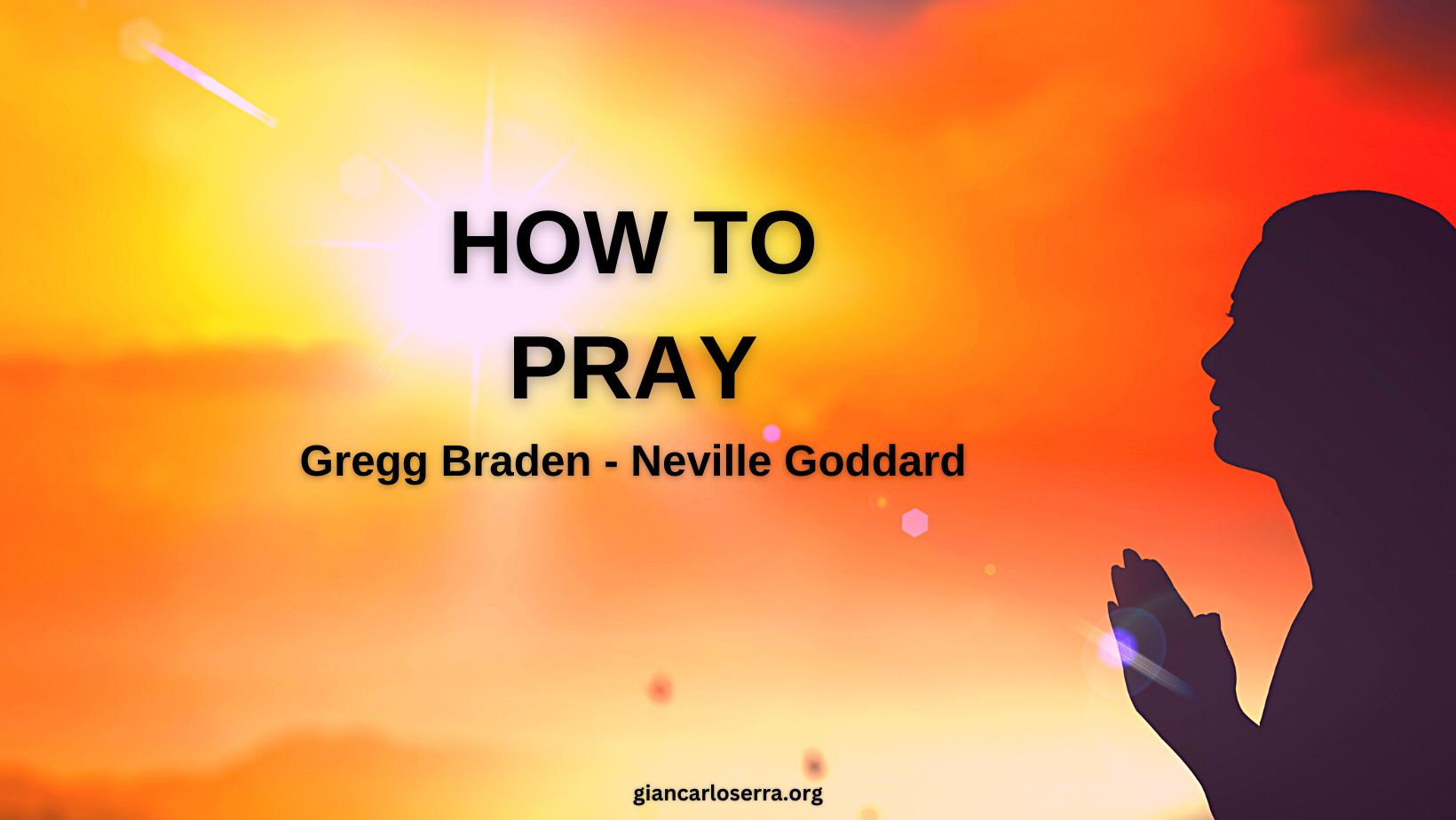 The Feeling Is The Language

In my previous post ‘How To Pray Effectively‘ Dr. Joseph Murphy explains how to make prayer more effective.

Joseph Murphy and Neville Goddard were both students of the Ethiopic mystic called Abdullah and they are both accredited for explaining the Law of Inverse Transformation.

In this post we are going to explore what Neville Goddard and Gregg Braden say about prayer.

We are biologically wired to tap into the Field. Neville Goddard always applied The Law most diligently, every single time he desired to manifest something in the physical world.

Let’s see a few examples of how FEELING plays a key role in the manifestation/co-creation process.

When Neville Goddard God Discharged From The Army

“.. and I slept that night as though I slept in my own home, in New York City on Washington Square, where I lived on the seventh floor. I lived in that floor, it was a very large apartment, two bedrooms, a lovely big living room, a dining room, a huge kitchen and the foyer, and …”

“I slept in my own bed, with my wife in her bed, and my little girl in the crib in the corner, I felt everything in that place just as though it’s taking place, and I rearranged the structure of my mind, and fell sound asleep in that state.“

“Placing myself on my bed, I saw my wife sleeping in hers. Then I rose, and looking out the window, I saw the Holly Apartments across the street and Washington Square down below. Turning, I walked into the living room, dining room, and the kitchen. I felt familiar objects and brought as many of my five senses alive in the drama as possible.“

Neville was not concerned with what the physical world was showing him. He looked into the Law of Liberty and persevered in that law. He knew that it was most important in the successful use of this law that at the actual point of falling asleep his consciousness be filled with the assumption that he was already what he wanted to be. All he did in imagination was based on the assumption that he was no longer in the army but in his own apartment.

He FELT everything in that place just as though it was taking place. He FELT familiar objects and brought as many of HIS FIVE SENSES alive in the drama as possible.

It took 8 days to manifest what he had imagined, in the physical reality.

The Story Of A Young Girl

In The Story Of A Young Girl, Neville tells the story of a sad young girl who dreaded going home on Christmas eve to an empty house. She had lost her dad in an accident that same year. When she was returning home, she saw how excited everyone was about going home and meeting their family and she couldn’t stop herself from crying.

“So, she stuck her face in the rain so that her tears could freely mingle with the rain and she wished that she was somewhere else. Somewhere far away from home, to be precise the island of Samoa.“

“While heading home to doom and gloom, this girl decided to experience a new reality in great vividness in her imagination and she saw herself so far away from home sailing in a ship and approaching Samoa instead of heading home in a streetcar.“

“10 days later she received a letter from this firm in Chicago stating that her aunt who left for Europe several years before had deposited with them three thousand dollars and gave the instructions that if she didn’t return to America the sum of money should be paid to her niece. The letter further said that they had just received news of her aunts’ death and they were now acting on her instructions.“

“One month later this girl sailed into the bay of Samoa and she experienced exactly the same thing she had experienced a month before. As she came into the bay it was late at night, it wasn’t raining but there was a spray of the sea in the wind and she could taste the salt of the sea just like she had tasted her tears.“

In this story, the young girl uses the same operating principles of The Law  and she adds very powerful principles.

– Managing in the ‘here and now‘ what was happening, which helped her with her sadness;

She does not just imagine the spray from the ocean, she FEELS the rain on her skin which she reinterprets as being the spray of the ocean as she is approaching the bay of Samoa in her imagination. She uses the sense of touch.

We now from what Neville says in his talk that it took 10 days to manifest.

The key points of these stories are:

– Your thoughts are powerful, they have a massive impact your subconscious mind.

– Your thoughts impregnate your subconscious mind. Every thought you have, is like a seed. You reap what you sow. If you don’t sow, you don’t reap.

– Emotional states are those in which we find ourselves day after day.

– We do not know the time intervals, However we do know that it works.

How Long Does It Take?

Neville addresses this question in this talk:

“I simply bring it to my mind’s eye what I want to see, see it clearly, explode it and then let it be. Now it could be tomorrow, it could be a month, it could be even years. I am not concerned. I have done it and that’s all that matters as far as I’m concerned.“

“And then I get the call or I get the wire or I get a letter confirming that which I did and I do nothing to make it so. … “

… There’s a time interval between that impregnation and the actual embodiment of that state. And I do not know the time intervals. … But I tell you, it works.”

“The vision has its appointed hour. It ripens, it will flower…. A little chicken- 21 days … a man-nine months … a horse-12 months … a little lamb-five months … and there is a time interval between that impregnation and the actual embodiment of that state. I do not know the time intervals. I only know that all I do I do it.“

The Key Is FEEL AS IF The Prayer Is Already Answered

“Science has demonstrated that human belief, emotion, and feeling extend beyond our bodies. We literally have a power within us to rearrange the stuff our universe is made of, physically and biologically.”

We know that we communicate with ‘The Field‘ every moment of every day, through what we feel and what we think. We are all connected.

We have already discussed The True Story of the Young Jewish Boy And His Father which provides some incredible evidence of how we are all connected.

The true story below gives us invaluable information of what we can do to pray effectively.

In the 1990’s Gregg is asked by a native friend David to accompany him to an old place that was build by the hands of his ancestors. This stone circle is a special place where they offer their prayers. They go there to offer a prayer of rain because of one of the worse droughts in recorded history.

When his friend David steps into the stone circle to offer the prayer, Gregg is expecting a ritual, a ceremony, some dancing. However none of this happens.

What happened is that David took off his old work boots, placed them outside the circle, stepped into the circle with his naked feet on the ground. He honoured all his ancestors, hi honoured all six directions.

He closed his eyes with his hands in a prayer mudra over his heart just just for a few seconds. He then, while still inside the circle, looks at Gregg and suggested they should go to eat something.

Gregg is confused and responds “I thought you were going to pray for rain”. David looks at him and says something really powerful:

“I smelled the smells, of what the rain smells like when it rolls off the Earth and walls; and I felt would it would feel like to walk through the corn that is this high against my naked chest because there has been so much rain to grow the corn. I heard the sounds of the rain”

“… and then give thanks of gratitude and appreciation for the rain that has already happened“.

Listen to the audio below to know what happened next.

The Prayer For Rain: A True Story – Gregg Braden

The concepts that David acknowledged in this story are:

– He’s communicating with that Field.

– He’s acknowledging that the FEELING IS THE LANGUAGE that the Field recognises.

– It is not so much about the words. The words can be spoken, however if they the words are spoken, the goal is to create the feeling.

– He’s acknowledged that he has the potential as a man, as a human, in the presence of this Field, to reach inside of the Field, into the realm of all things that are possible, isolate the possibility of his choice and collapse that potential into something real in our world.

– David uses a FEELING-BASED PRAYER – the KEY – FEEL AS IF THE PRAYER IS ALREADY ANSWERED.

– He incorporated all of the senses.

– He did not ask for something to happen, he felt it had already happened.

> Do This Before Going To Sleep