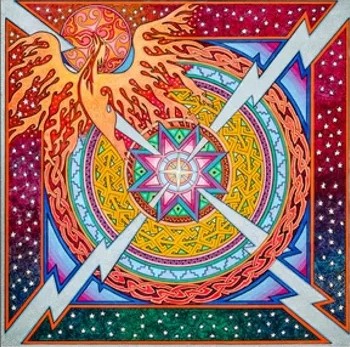 A few years ago I was guided to visit the Hill of Tara, which lies about 30 miles north-west of Dublin in County Meath. Tara gets its name from Teamhair na Rí meaning ‘sanctuary of the Kings.’ It is important as the traditional inauguration site of the ancient High Kings of Ireland. In ancient Irish religion and mythology Teamhair was the sacred place of dwelling for the gods, and was the entrance to the otherworld. Saint Patrick is said to have come to Tara to confront the ancient religion of the pagans at its most powerful site.

After arriving there, I ended up visiting the Tara Open Studio, a beautifully adorned studio owned by Courtney Davis. Courtney is an incredibly talented artist who has created over 50 books and exhibited his art Worldwide. I was instantly drawn to one of this artworks called Phoenix Raising, that Courtney completed in 2012. I immediately purchased a copy of the painting which I brought back to London.

Giancarlo has over ten years of experience in practicing and teaching Healing Arts. He is a Reiki Master Teacher of Usui/Tibetan, Holy Fire® and Karuna Reiki® systems of healing and works as a Consultant Spiritual Healer at the College of Psychic Studies in London.