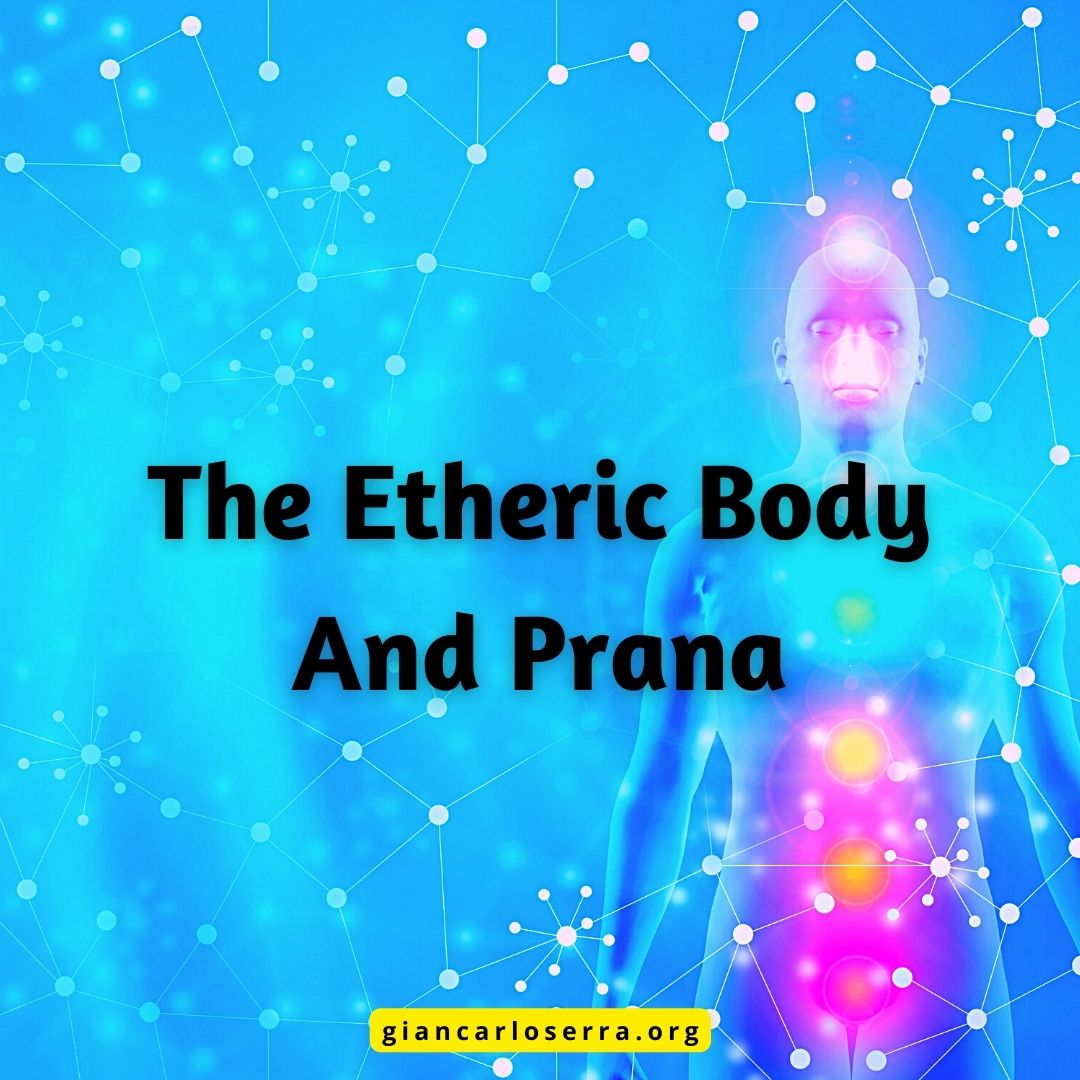 There is a very strong relationship between the etheric and the physical bodies. The etheric body plays a key role in diseases, healing and death.

Our etheric bodies are built by devas of various orders and are energised through devic activity by terrestrial and solar prana.

The etheric body, also referred to as the etheric vehicle, etheric double, vital body, or energy body, is the closest of the subtle vehicles to the dense physical form and provides the link between it and the astral and higher vehicles.

Ancient Egyptian religion spoke of the ka. Biblical Judaism discussed the nephesh, which captured the sense of both life and breath. In classical Greece, the physical body was said to be animated by the psyche, which the sixth-century BCE philosopher Anaximenes equated to breath. In India, we find the pranamaya kosha of Vedantic teachings and the sthulopadhi of Taraka Raja Yoga.

Isaac Newton famously wrote of a “subtle spirit,” pervading animal bodies, whose “vibration” propagates along nerves to the brain and muscles to produce movement.

Annie Besant wrote of the etheric body in The Ancient Wisdom (1897), and Rudolf Steiner in Theosophy (1904). Max Heindel discussed the “vital body” in The Rosicrucian Cosmo- Conception or Mystic Christianity (1910). Charles Leadbeater published his clairvoyant studies of the etheric body in Man Visible and Invisible (1925) and The Chakras (1927). Alice A. Bailey, who served as amanuensis for the Tibetan Master Djwhal Khul, provided a wealth of information on the etheric body in her twenty-four books.

The Etheric Body And Prana

Animals, plants, rocks, the Earth, the Sun, and all other entities in the universe also have etheric bodies.

The human etheric body permeates and extends a short distance beyond the physical body and resembles its physical counterpart in shape.

Some writers claim that it extends about one-half of an inch (a little over a centimeter) beyond the physical body.

Charles Leadbeater reported that it extends “very slightly” beyond the physical body. Alice Bailey stated that it “may extend for a few or many inches.”

Clairvoyants see this area as the innermost part of a person’s aura.

Leadbeater described it as “a mass of faintly luminous violet-grey mist.”

The astral body, also known as the sentient or emotional body, may extend much farther from the physical body.

Alice Bailey stated that the etheric body has one main objective:

“This is to vitalize and energize the physical body and thus integrate it into the energy body of the Earth and of the solar system. It is a web of energy streams, of lines of force and of light. It constitutes part of the vast network of energies which underlies all forms whether great or small (microcosmic or macrocosmic). Along these lines of energy the cosmic forces flow, as the blood flows through the veins and arteries. This constant, individual—human, planetary and solar—circulation of life-forces through the etheric bodies of all forms is the basis of all manifested life, and the expression of the essential non-separateness of all life.“

In other words, the etheric body is not individualised and its energy flows from one living entity to another.

This startling realization gives precise meaning to affirmations like “We are all connected” or “We are all One.”

The sharing of etheric matter throughout the cosmos provides the medium for telepathy and also gives meaning to concepts like divine omniscience. Bailey described the “golden etheric web” through which “there is a constant circulation of energies and forces,” adding that “this constitutes the scientific basis of the astrological theories.” Space itself, which ordinarily we consider empty, is said to be etheric in nature.

The cosmic etheric web has a geometric pattern. The pattern is not uniform throughout the universe but varies from one planet or sun to another according to its point of evolution. Earth’s etheric body currently has a square
structure, whereas the “etheric webs of the sacred planets are largely triangles, whilst that of the Sun is that of interlaced circles.

In Bailey’s words: the human etheric body serves as a receiving agency for energies coming from “the planetary aura,” “the astral world,” “the universal mind or manasic force,” and “the ego itself.” It also serves as a medium through which those energies circulate to produce life and health.

Planetary prana has its origins in the Sun but has been imprinted with the energy of the planet. It is solar prana which has passed throughout the planet, has circulated through the planetary etheric body, has been transmitted to the dense physical planet, and has been cast off thence in the form of a radiation of the same essential character as solar prana, plus the individual and distinctive quality of the particular planet concerned.

Solar prana, “that vital and magnetic fluid which radiates from the sun . . . is transmitted to mans’ etheric
body through the agency of certain deva entities of a very high order, and of a golden hue.” Bailey gave no indication that these devas are, or are related to, the manasaputras, or solar angels, who serve, on a one-on-one
basis, as our mentors and orchestrate our incarnational journey.

In the teachings of Theosophy, Devas are regarded as living either in the atmospheres of the planets of the Solar System (Planetary Angels) or inside the Sun (Solar Angels) (presumably other planetary systems and stars have their own angels) and they help to guide the operation of the processes of nature such as the process of evolution and the growth of plants; their appearance is reputedly like coloured flames about the size of a human being. Some (but not most) devas originally incarnated as human beings.

Nature spirits, elementals (gnomes, ondines, sylphs, and salamanders), and fairies are said to be on the “deva evolution” line of spiritual development; as their souls advance, they eventually incarnate as devas but never incarnate in human form. Theosophists assert that all these beings possess only an etheric body, and no physical body, and that they can be observed when the third eye is activated.

Firstly, the primary part is the Etheric Double. This double is an exact duplicate of our human body right down to the atoms, cells, tissues, muscles, and organs. Think of the Etheric Body as a photographic negative. Additionally, the first part of the Etheric Body also contains our chakras and countless energy channels called meridians.

Secondly, the aura is the next part of the Etheric Body. It’s an egg-shaped electromagnetic field of luminous waves which surrounds us. Every person has an aura. Comprised of moving colors, the aura extends out roughly three feet from the physical body. The colors of the aura are in constant flux and are continually shaped and reshaped by patterns of thought and feeling. It can reflect our personalities, lifestyles, and physical condition. Likewise, the Aura contains past, present, and even future lifetime data.

3. Thirdly, find out more about how the aura provides this information in our Akashic Records Course at Imagine Spirit.

In the phenomena of phantom limbs, individuals who’ve lost a limb sometimes complain that they can feel pain at the extremities where the appendage once existed. This phenomenon occurs because the etheric part of the appendage stays with the physical body. And, under certain conditions of stimulus, people claim that feeling sensations happen where the missing limb once was.

‘Vibrational Medicine’ by Richard Gerber, described experiments by a Korean acupuncturist Dr. Kim who did experiments on rabbit and chick embryos which showed fine lines of structure forming within hours of fertilisation, i.e. before the organs had formed. These lines were not related to the blood network, i.e. they were not veins, and they were an energetic holding pattern. Also, he detected an energy axis that precedes the spine in the unfertilised egg of salamanders which showed that an energetic potential has to exist for physical manifestation to take place. Every organ, bone, limb, tissue, etc. Has an energetic structure around it, holding and permeating it.

From “The Etheric Double” – A. E. Powell

The etheric body is made of numerous energy channels called nadis or meridians. It is a web or network of fine interlacing etheric channels, “like a sparkling web of light beams”. These channels appear to psychics, as luminous string-like hairs that radiate outwards and carry energy that moves in wave like motions.

There are seven major energy centres, called chakras that are connected to the endocrine glands. The chakras relate to different levels of consciousness. There are also twenty-one minor energy centres. The condition of the etheric centres will determine the health of the physical body.

The Etheric Body plays an integral part in determining the type of physical vehicle incarnating individuals decide to inhabit. At death, the Etheric Body separates from the Physical Body. And, like the Physical Body, it dies and decomposes in due course, releasing the “soul” to the Astral Body for the next stage of the soul’s never-ending journey.

According to clairvoyants who have observed the process, spiritualist mediums have the unusual ability to dislodge their etheric body from the physical body. In such a condition, the medium is able to cause certain physical phenomena to occur such as table rapping and the movement of objects. The effort to produce this result is very exhausting for the medium.

Very loud noise is said to be damaging to the etheric body. However the etheric body has excellent recuperative qualities and usually recovers when the disturbing influence ceases.

A general anaesthetic causes a major shock to the etheric body. As a result it takes a while for person to recover from a major operation. If healing is given to the person soon after an operation this will greatly assist their recovery.

The excessive consumption of narcotics and alcohol is disruptive to the etheric and astral bodies. Some people have suggested that this might be the cause of the mental disorders.

Giancarlo works as a Hypnotherapist, Past Life & Regression Therapist and a Reiki Master Teacher in London, and via Zoom, Skype or telephone.