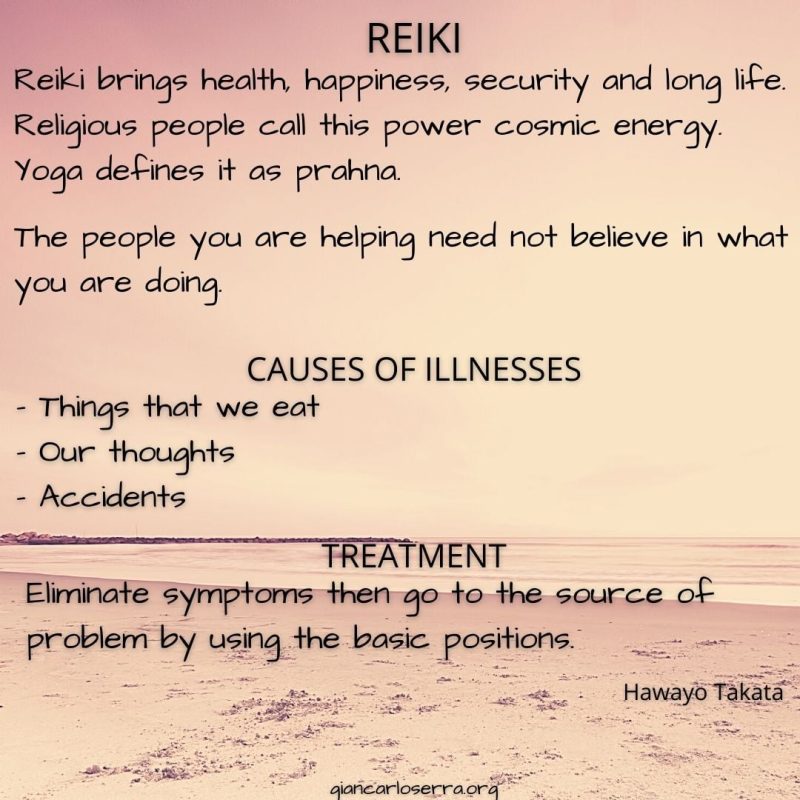 Mrs. Takata brought Reiki to Hawaii in 1938, after receiving Reiki 1 and Reiki 2 training from Hayashi Sensei during a yearlong internship at his clinic in Japan. She was a successful healer and business woman, and she taught Reiki for over 40 years, until her passing in 1980.

Takata had received Hayashi’s manual, but she made it a rule that students not be given anything in writing and should not be allowed to take notes or tape-record Reiki classes. One of the myths that Takata created is that Reiki is an oral tradition.

John Harvey Gray became a Reiki Master Instructor in 1976. John, who passed away January 12, 2011 at age 93, took his entire Reiki training in 1976 with Mrs. Hawayo Takata, who brought Reiki to the West from Japan. In his career, he conducted well over 600 Reiki classes, and earned a reputation as an outstanding teacher, and as a practitioner of the highest integrity.

According to John Harvey Gray, Takata changed the system of Reiki from what she was taught by Hayashi Sensei; she told him she had simplified the system, making it easier for Westerners to learn (John Harvey Gray and Lourdes Gray with Steven McFadden and Elisabeth Clark, Hand to Hand: The Longest-Practicing Reiki Master Tells His Story (Gray 2002), page 93.).

The system Takata created, though different than what she had been taught, is an effective healing system.

William Lee Rand received a packet from Alice Picking, who had taken a Class from Takata in June 1975 in Cherry Hill, New Jersey:

“In this class Takata mentioned nothing about an oral tradition. Instead, she provided instructional handouts to her students and allowed them to take notes. The packet I received included Alice’s copy of the handouts Takata had given students, along with the notes she had taken. She also sent her Reiki certificate signed by Takata, several handwritten letters from Takata, along with a postmarked envelope, and the class list of 20 students. I talked with several of the students on the class list, and they verified he information Alice had sent me” (William Lee Rand, Takata’s Handouts – ICRT).

Another reliable source of verified information about how Takata practiced and taught Reiki is the article writtenn by Marianne Streich which appeared in the ICRT’s Spring 2007 edition How Hawayo Takata Practiced and Taught Reiki” (ICRT magazine, Spring 2007).

In these posts we are going to see some of the notes taken by Alice Picking and additional information on how Hawayo Takata’s used to teach and practice Reiki.

“Included in the packet from Alice Picking was a letter dated 1977 that Takata sent out to those who sponsored her classes. In this letter Takata thanks all who helped her promote Reiki and states she will be retiring. Added at the end is the statement that she has created three Reiki Masters to “carry on this noble work.”.

These three Reiki Masters are:

“Apparently she changed her mind about retiring and about having only three Masters. She created many more (a total of 22) and continued to practice and teach until her passing at the end of 1980″ (William Lee Rand, Takata’s Handouts – ICRT).

The Concept of “Grandmaster of Reiki“

“The concept of Grandmaster of Reiki didn’t develop until after Takata passed.

Soon after her passing, Barbara Weber Ray, one of the 22 Masters, declared that Takata had appointed her as Grandmaster of Reiki. This title was not a part of the Usui system, and Ray offered no meaningful proof to support her claim.

Shortly after this, a group of Takata’s Masters asked Phyllis Furumoto if she would be the Grandmaster, and she accepted. Because there was little authentic historical information about Reiki at this time, many people accepted the concept of Grandmaster, but as research revealed the facts, this idea lost credibility within the Reiki community.” (William Lee Rand, Takata’s Handouts – ICRT).

Giancarlo Serra works as a Complementary Health Practitioner – Reiki and Healing. He offers 1-2-1 consultations and Reiki training, both in person and online.