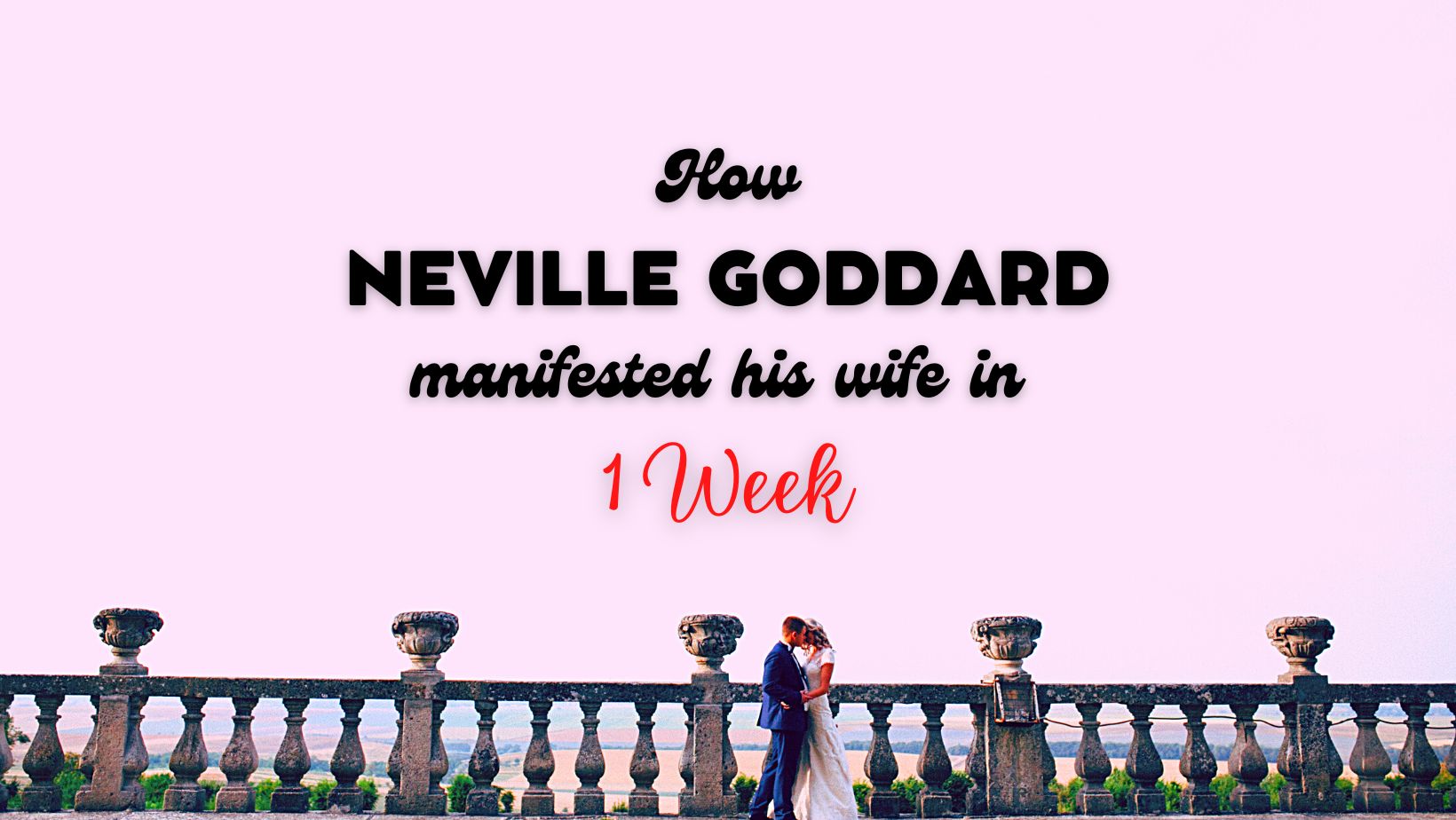 How Neville Goddard Manifested His Wife In One Week

We are all very well aware that often there are deep-rooted negative beliefs associated with spirituality.

These below are just a few negative beliefs:

“I cannot be wealthy”

“I cannot be happy”

“I cannot be healthy”

“I cannot be rich”

We have all inherited these negative beliefs in one form or another, mostly resulting from past religious self-harm practices aimed at the mortification of the flesh. There days many people may not be using physical starvation or flagellation, but we are all to a certain extent using emotional and mental self-harm.

At the root of our problems there is a disconnection between our soul and our incarnated existence. At some level we are deeply unhappy that we are in a human body and we spend our lives rediscovering who we really are. When we will finally manage to do that, reconciliating our spiritual and personal self, we are told that we will experience ‘heaven on earth.’

It is important to understand that spirituality and material ‘stuff’ can and must coexist. We have come to this world to create and manifest into physical form.

We are spiritual beings, so why we are here, really? In part, to bring the energy of creation to ourselves and to the World. Each of us is unique and we all have gifts we can use to help ourselves and to contribute to humanity.

We can create in many ways, that depends on the unique set of skills that we have. Some of us use beautiful words, others great listeners, some people have wonderful gardening skills, make delightful creations through arts, science, cooking, therapy, etc. In order to create, we need to build up creative energy in our sacral chakra (creation – physical and metaphysical) and bring it up to the throat chakra, so that it can be expressed in the physical world.

The whole process unfolds and needs the heart centre, where love and compassion are needed, for ourselves and for others.

We need to bring creation into physical form, and in order to do this, we need to employ tools and techniques that can help us doing just that.

Neville Goddard is a master in this work. In this lecture, he talks about ‘manifesting his wife’.

“When I decided to marry the lady who now bears my name I applied this principle. At the time I was terribly involved. I had married at the age of eighteen and became a father at nineteen. We separated that year, but I never sought a divorce; therefore, my separation was not legal in the state of New York.”

“Sixteen years later, when I fell in love and wanted to marry my present wife, I decided to sleep as though we were married. While sleeping, physically in my hotel room, I slept imaginatively in an apartment, she in one bed and I in the other.”

“My dancing partner did not want me to marry, so she told my wife that I would be seeking a divorce and to make herself scarce – which she did, taking up residence in another state. But I persisted! Night after night I slept in the assumption that I was happily married to the girl I love. ”

“Within a week I received a call requesting me to be in court the next Tuesday morning at 10:00 A.M., giving me no reason why I should be there, I dismissed the request, thinking it was a hoax played on me by a friend.”

“So the next Tuesday morning at 9:30 A.M.I was unshaved and only casually dressed, when the phone rang and a lady said: “It would be to your advantage, as a public figure, to be in court this morning, as your wife is on trial. “What a shock! I quickly thanked the lady, caught a taxi, and arrived just as the court began.”

“My wife had been caught lifting a few items from a store in New York City, which she had not paid for. Asking to speak on her behalf I said: “She is my wife and the mother of my son. Although we have been separated for sixteen years, as far as I know, she has never done this before and I do not think she will ever do it again. We have a marvellous son. Please do nothing to her to reflect in any way upon our son, who lives with me. If I may say something, she is eight years my senior and may be passing through a certain emotional state which prompted her to do what she did. If you must sentence her, then please suspend it.”

“The judge then said to me, “In all of my years on the bench I have never heard an appeal like this. Your wife tells me you want a divorce, and here you could have tangible evidence for it, yet you plead for her release.” He then sentenced her for six months and suspended the sentence. My wife waited for me at the back of the room and said: “Neville, that was a decent thing to do. Give me the subpoena and I will sign it.” We took a taxi together and I did that which was not legal: I served my own subpoena and she signed it.”

“Now, who was the cause of her misfortune? She lived in another state but came to New York City to do an act for which she was to be caught and tried. So, I say: every being in the world will serve your purpose, so in the end, you will say:

“Father forgive them, for they know not what they do.”

“They will move under compulsion to do your will, just as my wife did.”

“I tell this story only to illustrate a principle. You do not need to ask anyone to aid you in the answer to a prayer, for the simple reason that God is omnipotent and omniscient. He is in you as your own wonderful I Am ness. Everyone on the outside is your servant, your slave, ready and able to do your will.“

“All you need do is know what you want, Construct a scene which would imply the fulfilment of your desire. Enter the scene and remain there. If your imaginal counsellor (your feeling of fulfilment) agrees with that which is used to illustrate your fulfilled desire, your fantasy will become a fact. If it does not, start all over again by creating a new scene and enter it.”

“In my own case the scene was a bedroom of an apartment, with my wife in one bed and I in the other, denoting that I was no longer living in a hotel alone. I fell asleep in that state, and within one week I had the necessary papers to start action on a divorce.“

Living From The End

– Neville tells that he could not marry his specific person because he was already married to a woman who refused to give him a divorce no matter what.

– What many people would do in a case like this is focus on solving the problem, in this case forcing the first wife to agree to a divorce. But Neville did not do that, because this would not be living from the end.

– The end result he wanted was not the divorce; it was being married to his specific person he was in love with. So instead of focusing on the first wife or imagining her agreeing to give him a divorce, he went straight to the end.

– Neville constructed an imaginal scene where when he went to bed every night, he was not alone. He was lying in his bed and his future wife was lying in the other bed. He pre-supposes that he had already married his specific person. He did not concern himself with the how this marriage would take place, or how his first wife would finally get persuaded to give him a divorce. He went straight to the end, to the state of already being married to his loved one and sleeping in the same room with his loved one, and focused on that, and let everything else take care of itself.

The “Forgiveness Aspect “Of The Story

His first wife deliberately refused to give him a divorce and his dancing partner was actively working against this divorce, going as far as telling his first wife to disappear so they could not find her for the divorce to happen.

Neville did not concern himself with any of that. He persisted in imagining as if his desire had already come to pass, and in living from the end, and within a week, things happened. He forgave her for all the trouble she had caused him and did not force her into giving him the divorce, and he did not testifying against her.

Neville proved that if you persist on living from the end, then things take care of themselves in ways you never could have imagined.

What Lessons Can Be Learned From This Story?

We can all learn from this story, and the following are only my personal considerations:

1. Go to the end and live from the end you desire, and let go of all the stages in the middle. It is not our job to worry about how to get to the end.

2. Forgive people for what they have done, because people just play the part you assigned to them. Everyone is you pushed out. And if you forgive them, then the thing inside you that creates them like they are will dissolve, and they will change right in front of your eyes. Just like when Neville forgave his first wife and did not use her arrest as an opportunity to get revenge and force her to give him a divorce, she was all of a sudden a different person, a person who was suddenly grateful.

3. Taking any goal and bringing it into reality:

“Now there’s a definite technique to it, a simple, simple technique.

“If I can share with you what I do and it works.“

“I bring them into my mind’s eye and I work myself up into an emotional state.“

“I set it up and then all of the sudden I have a deep, deep inhalation and every pore of my being explodes and then I do nothing beyond that.”

“It’s taking that scene and setting it up in a time exposure before the eternal event and then I explode it! And then let life develop it and life develops it.“

How Neville Goddard Manifested His Wife In One Week