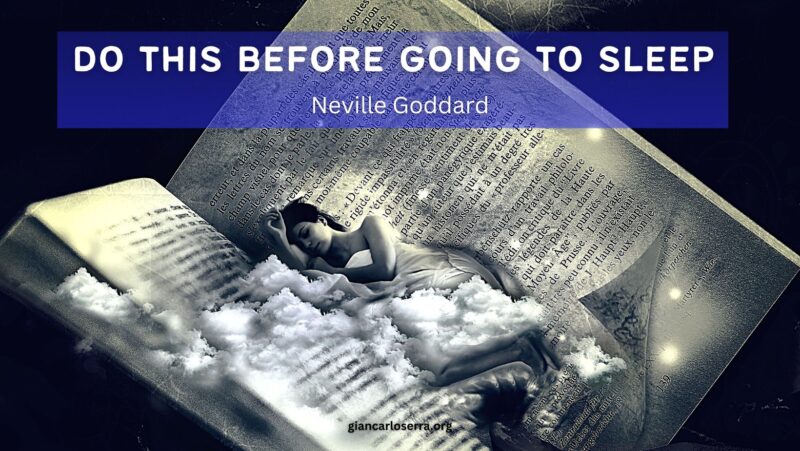 While much of Goddard’s writings involve quotes and interpretations of Biblical stories, his philosophy is far more practical than religious, describing how imagination creates reality , and he consistently outlines a series of steps you can take to apply his teachings to your daily life.

Neville takes sacred scriptures and interprets them symbolically. Here he talks about Psalms 4:4.

4  Be angry, but sin not; commune with your own hearts on your beds, and be silent. [Selah]

“Upon your bed, be silent as you commune with your own heart, with self, because the self of Man is God. You do not commune with another. You know exactly what you want, and in that state, fall asleep.“

A state is an attitude of mind, a state of experience with a body of beliefs which you live by. You are an immortal being, you are not a state. There are infinite states in the world, You enter a state and the state becomes alive.

When you are in that state, you must express the content of that state. You don’t need to feel emotions to manifest, you need to be in the state that matches your desire, not being “emotional” about it.

For example, Neville’s teacher Abdullah told him to ‘sleep the night in Barbados‘ so that he could move into that state and actually go to Barbados (which Neville later brought forth in the material world):

What we place in our imagination is more than just an empty thought, it becomes our reality.

” … And in a way that no one knows, and you and your surface mind; you do not know, it will all come to pass. Everything in this world is created in this way, but man does not know it”.

In his talks, Neville says that he does not really know the mechanics of creation. However, he has absolute faith that ‘lt will all come to pass‘, that anything that is impressed upon your subconscious mind with your conscious mind will eventually birth itself into existence in the physical plane.

Once one has a clear visualization of what they are striving for, they can then bring all of their attention towards envisioning that for themselves; focusing only on their highest expectations instead of the “how” it will happen, thus allowing the process of manifestation to unfold on its own.

You must be intense about it

“So, because you are lukewarm-neither hot nor cold-I am about to spit you out of my mouth.”

Neville says that no matter what you want in the world, you must ne intense about it. You must have a burning desire.

“No one may achieve success without first knowing precisely what he wants. Study any person who is known to be a permanent success and you will find that he has a Definite Major Goal; he has a plan for the attainment of this goal; he devotes the major portion of his thoughts and his efforts to the attainment of this purpose.” – Napoleon Hill

You must be intense about what you want, and then commune with your own heart upon your bed – and then let it drop.

This is exactly How Neville manifested his wife in 1 week! Neville constructed an imaginal scene where when he went to bed every night, he was not alone. He was lying in his bed and his future wife was lying in the other bed. He pre-supposed that he had already married his specific person. He did not concern himself with the how this marriage would take place, or how his first wife would finally get persuaded to give him a divorce. He went straight to the end, to the state of already being married to his loved one and sleeping in the same room with his loved one, and focused on that, and let everything else take care of itself.

The World Of Mortality Is A Shadow

“…. and all that you behold, though it appears without, it is within, in your imagination of which this world of mortality, is but a shadow”

YOU DO NOT SAY “I am unemployed” but YOU SAY “I am gainfully employed, making more that I have ever made before”.

You look into the perfect law, the law of Liberty and I persevere in that law.

According to Neville, the two most important elements here are:

– You see yourself in your imagination

In order to use positive affirmations and the Law Of Liberty effectively, you need to work on your negative beliefs such as “I am not good enough“, “I will never be rich“, “I cannot be healthy“, “It am too old for…”, “Someone else is to blame” and so on.

Feeling IS the Secret

You impress your subconscious mind with your thoughts and feelings. The subconscious transcends reason and will bring about whatever situation it sees fit to get the job done.

“What you feel you are, always dominates what you would like to be; therefore to be realized, the wish must be felt as a state that is, rather than a state that is not. Sensation precedes manifestation and is the foundation upon which all manifestation rests” – Neville Goddard

Do This Before Going To Sleep – Neville Goddard

> The Story Of A Young Girl

> How To Take Any Goal And Bring It To Reality

> All Things Are Possible To Him Who Believes

> Feeling Is The Secret by Neville Goddard

> How Neville Goddard Manifested The Impossible Tickets For Aida