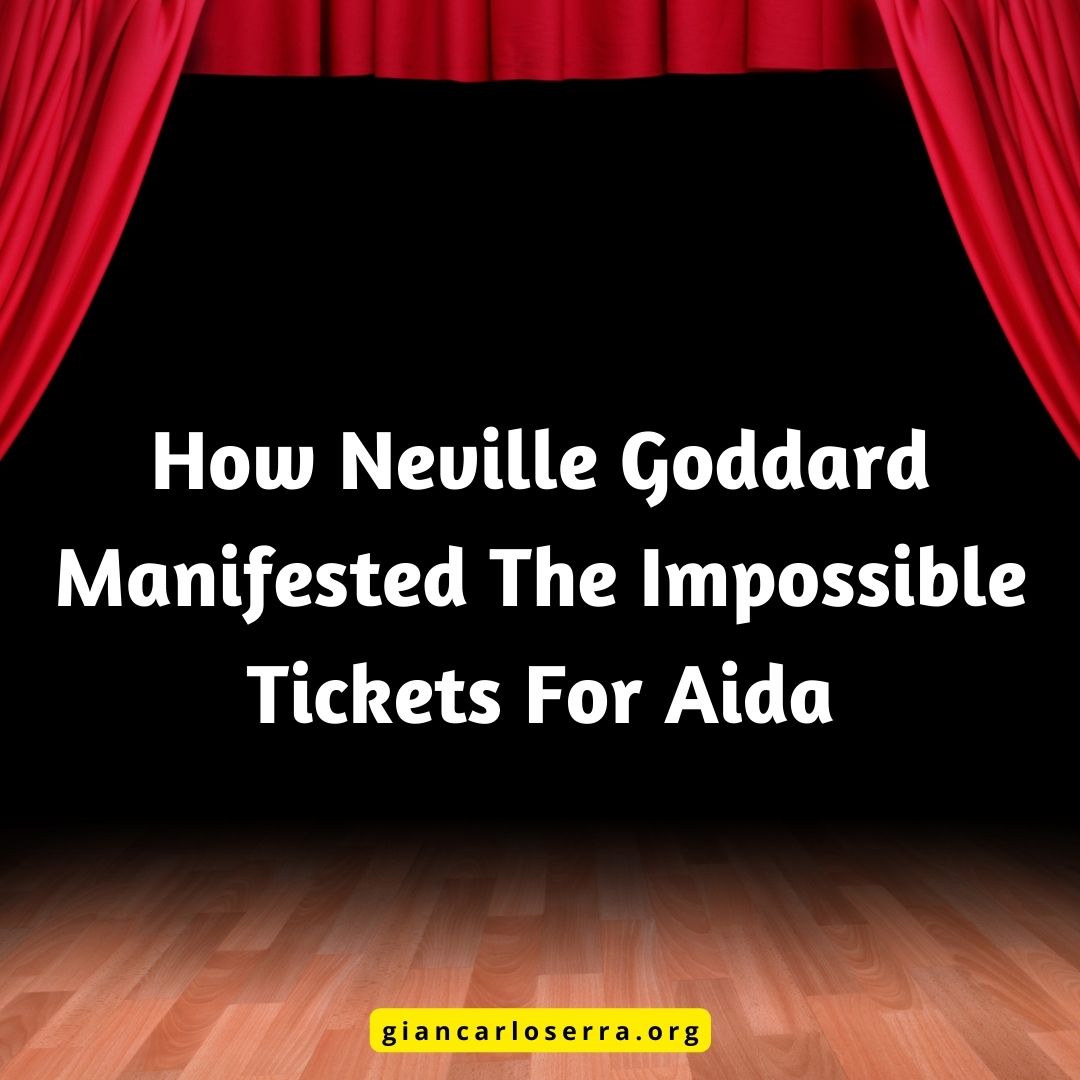 Neville Goddard is one of the greatest spiritual teachers of the 20th century. His writings helped advance the idea that your thoughts create your reality, and were some of the earliest teachings on The Law of Attraction, and the ability of any individual to gain control of his circumstances through personal empowerment.

While much of Goddard’s writings involve quotes and interpretations of Biblical stories, his philosophy is far more practical than religious, describing how imagination creates reality , and he consistently outlines a series of steps you can take to apply his teachings to your daily life.

This is one of our favourite stories of Neville Manifesting The Impossible.

How Neville Goddard Manifested The Impossible Tickets For Aida

Well the newspapers said it was sold out from the very moment that it was stated a new presentation, same music naturally, the same score, but new scenery, something new about it. And this captured the imagination of all opera lovers and they all wanted to see Aida.

We got there and huge big signs on the outside, no seats for Aida available and they were plastered all over the Metropolitan. I went in and there were 3 lines leading to the 3 windows selling tickets for the entire season and there was no seats for Aida. I got into the first line. It was a very long line, then I saw the third line from me moving more rapidly than the first and the second so I moved over to that line.

Then they all moved rapidly forward as we got to the window and seemingly no hope of getting tickets, but before I left my hotel room I simply assumed that I had the tickets for my 2 brothers. I didn’t want to go, they wanted to see it so I assumed that I gave them the tickets. I got into this line and it moved rapidly towards the window as we got there, to the window, a tall blonde man, he was about oh he must have been about 6, I’m 5’11, he must have been about 6’4.

He stretched his hand up over my head and diverted the ticket seller as he asked the question, why one in front of me is buying, it’s not for Aida for that’s completely sold out, he is buying 2 other seats from some other opera. Then he departed after he diverted the man’s attention. This man pushed on some bills under the window and then as the teller looked at the money, and this man is at the door now, the tall, tall blonde fellow. And he gave this man the ticket and then suddenly he said, well he only gave me 3 dollars he should have given me, and he mentioned the money he should have given me.

At that he was bewildered. The teller, was bewildered. I turned around and I screamed at that tall blonde, I said, “Sir”. I screamed so loudly he couldn’t stop but be attentive, he turned around I said, “Come back here you’re wanted.” He came back like a little child being led by the nose, he came back and he said, “What’s wrong?” And the man said, “This is all that he gave me, 2 one dollar bills”. He said, “Oh no he didn’t, he gave you your change.” I said, “No you didn’t I was standing right here. I saw what you did. You gave 2 one dollar bills, that’s all that you gave him.”

The man was flabbergasted. He was so completely dumbfounded he didn’t know what to do. I said, “I am standing here, I saw exactly what was done.” Then he opened up his purse and there was a stack of ones and he had a 20 dollar bill and 2 tens. He said to the man, “When will you discover your mistake that I gave you 2 tens?” And the man said to him, “At the end of the season.” And with that it was closed and the man then took out the money and paid for the ticket and took back his 2 ones.

Then I said to him “I want 2 seats for Aida tonight and I want them in the horseshoe circle. I want them center.” He said, “Yes Sir,” and he took from what he called the VIP, they always keep a few out, when the house is sold out they always keep a few seats for those who are coming called the very important people. I am certainly not a very important person, but I saved him from the loss of 20 dollars and he quickly took the 2 seats out and said to me,”20 dollars.” I gave him the 20 dollars, went back and gave the 2 seats to my brothers.

How Did He Do It?

1. Assuming the feeling of the wish fulfilled: before taking any action, before going out and standing in line, Neville assumed that he had the tickets to give to his brothers. NB – Feeling that Neville Goddard talks about isn’t an emotion, but the knowing that we do already have what we imagined.

3. What happened at the theatre: Neville, while living from the state of his wish fulfilled – found himself in line – and found himself changing lines – and found himself confronting the con man. Everything in the universe – including Neville’s own body – played it’s part perfectly – and everything happened very easily because he fully followed the formula  and he stayed in his state.

Feeling Is The Secret

What we place in our imagination is more than just an empty thought, it becomes our reality.

When one assumes the feeling of a wish fulfilled, they are imagining the feeling of how it would feel if they already had the things that they desire. One can do this simply by asking themselves the question, “how would I feel if I already had it?”

Once one has a clear visualization of what they are striving for, they can then bring all of their attention towards envisioning that for themselves; focusing only on their highest expectations instead of the “how” it will happen, thus allowing the process of manifestation to unfold on its own.

And of course as I like to remind myself, infinite patience produces immediate results.

Giancarlo Serra lives and works in London as a Reiki Master Teacher, Hypnotherapist and Past Life & Regression Therapist. He runs Usui/Tibetan and Usui/Holy Fire® III Reiki courses, and offers online consultations via Zoom, Skype or telephone.