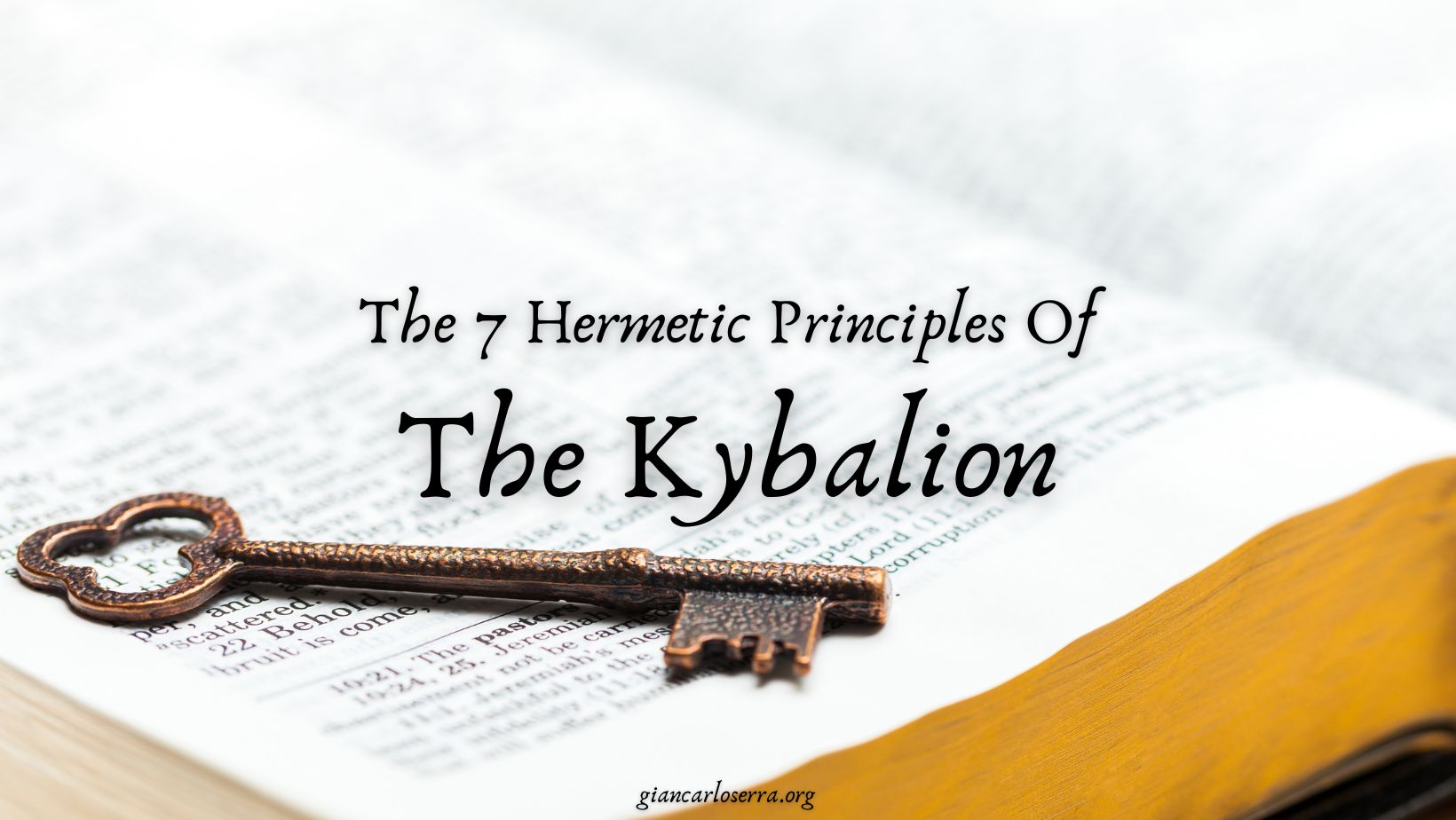 “When the ears of the student are ready to hear, then cometh the lips to fill them with wisdom.”

The Kybalion was first published anonymously in 1908 by “The Three Initiates.” The true authorship of the work is unknown, although theories suggest it was written entirely or in part by William Walker Atkinson.

Atkinson was a prolific writer and supported the New Thought movement of the 19th and early 20th centuries. New Thought included the belief that our realities can be manifested by mental effort, which is also suggested in Hermetic principles. Scholars point to similarities in style and content between The Kybalion and Atkinson’s own The Arcane Teachings as evidence that he was one (or all) of “The Three Initiates.”

The Kybalion provides an introduction to the teachings of Hermes Trismegistus-Hermes “the Thrice-Greatest.” This “Master of Masters” is said in The Kybalion to have lived 300 years on Earth, and believed by some to be the founder of both astrology and alchemy (precursors to astronomy and chemistry, respectively).

Hermes Trismegistus was deified after his death as Toth by the ancient Egyptians, and Hermes by the Greeks. In both pantheons, this man-turned-god was considered a symbol of great wisdom.

The book is said to appear in your life when the time is right and you’re ready to receive its teachings.

The Emerald Tablet of Hermes is a short, ancient text attributed to Hermes Trismegistus himself. Unlike The Kybalion, which aims to provide some explanation and instruction, the brief Emerald Tablet has been puzzling and fascinating scholars for over 1,000-years.

The Emerald Tablet of Hermes the Kybalion compose two pillars of Hermetic thought.

Consisting of a mere 14 stanzas, the Emerald Tablet is said to contain the secrets of prima material, the foundational material of the universe. The Emerald Tablet and its teaching influenced freemasonry and philosophy throughout history.

The text of the tablet has been translated and commented on by a variety of scholars, including Sir Isaac Newton who was inspired by its teachings throughout his life and work.

The earliest known version of the text comes from an Arabic work written between the 6th and 8th centuries by Balinas. He claimed to have found the tablet hidden in a vault beneath a statue of Hermes.

Another story claims the tablet was written by Seth, the third son of Adam and Eve.

And yet, another says the tablet was uncovered and then reburied by Alexander the Great.

The source and material of the physical tablet is unknown. It was reported to be a rectangular green stone, with text in raised bas-relief rather than engraved.

Some even claim there never was a physical tablet at all, although several accounts claim it was on display in Egypt in 330 BCE.

Whatever its origins and history, the work was first introduced to the West in the 12th century through Latin translations. Since then, this cryptic text has been translated and re-translated, pored-over and analised by philosophers, historians, and theologians alike.

The 7 Hermetic Principles Of The Kybalion

“The principles of truth are seven; He who knows these, understandingly, possesses the magic key before whose touch all the doors of the temple fly open.”

The Kybalion’s explanation of Hermetic teachings are claimed to have been passed down orally for centuries, eventually reaching “The Three Initiates.” The fundamental Hermetic traditions presented in The Kybalion consist of seven “working principles”. Some say these seven laws govern the entire universe.

Within these seven principles is true wisdom, tied to no particular place and no particular religion. It is the “sacred flame” kept lit by a chosen few used to “re-light the lesser lamps of the outside world when the light of truth grew dim…” In short, these are the truths of the universe, regardless of era or creed.

The 7 hermetic principles can be applied to a modern day scenario quite well. You just have to read it with an open mind and be willing to understand the core essence of its axioms from a universal point of view.

These are the 7 Ancient Principles from The Kybalion:

1. The principle of mentalism

“The All is Mind; the Universe is Mental.”

There are three realms: the physical, the mental and the spiritual. Each one of these realms has its own observable laws. Hermetic means “secret,” “esoteric” or “occult.” It refers to knowledge that’s in correspondence with the conduct of the Universe.

If you understand these laws you can use them to master all of the three planes of existence. In an everyday setting, these principles can help you come to terms with some of the fundamental aspects of the world and apply that to your life.

Everything that exists is energy, and matter is just densified energy. We can also say that everything that exists is spirit, which is just refined matter. All is just energy. The ALL – the substantial reality underlying all the outward manifestations and appearances which we know under the Universe – is spirit. It’s undefinable but considered as a universal living mind.

“All is mind” embodies the idea that everything that happens has to be the result of a mental state that proceeds it. Energy follows thought, and and thoughts manifest into its actual physical form in reality.

> How To Harness The Incredible Power Of Your Thoughts

2. The principle of correspondence

Everything – all of the planes of existence – are connected and in correspondence.  The macrocosm is found in the microcosm and vice versa – solar systems, societies and life on Earth reflects the same thing on the cellular and atomic level. Creation, nature seem to mimic a pattern building: the roots of a tree and the anatomy of the lungs, the brain and the walnut, the Nebula and the eye.

The outer world is a reflection of our inner world.

“They say that if a butterfly flaps its wings in the Amazonian rain forest, it can change the weather half a world away. Chaos theory. What it means is that everything that happens in this moment is an accumulation of everything that’s come before it. Every breath. Every thought. There is no innocent action. Some actions end up having the force of a tempest. Their impact cannot be missed. Others are the blink of an eye. Passing by unnoticed. Perhaps only God knows which is which. All I know today is that you can think that what you’ve done is only the flap of a butterfly wing, when it’s really a thunderclap. And both can result in a hurricane.”

You can’t travel within, standing still without; as you start to do some of this inner work, learn and go deeper within yourself – as above so below – you get to these deeper layers and that is going to change the way you operate through your life. Your personality creates your personal reality.

3. The principle of vibration

Everything – starting from the largest of matter down to tiniest of particles – is at different degrees of vibration.

The practical application to this is described as “mental transmutation” – change your mental state and you change your vibration. Your state of mind affects your reality. We can also talk about mental alchemy, which is the ability to transmute your emotional and mental state to achieve the desired results. The law of attraction and the law of vibration are another expression of this law.

4. The principle of polarity

“Everything is dual; everything has poles; everything has its pair of opposites; like and unlike are the same; opposites are identical in nature, but different in degree; extremes meet; all truths are but half-truths; all paradoxes may be reconciled.”

“…Everything has its pair of opposites; Like and unlike are the same; Opposites are identical in nature, but different in degree; Extremes meet; All truths, are but half-truths; All paradoxes may be reconciled.“

Polarity means that the extreme opposites are actually the different degrees of the same thing. Take temperature for an example – heat and cold aren’t distinct entities or phenomenon but the same thing. Their only difference lies in the matter of degree.

This same principle can also be found on the mental plane. Love and hate; fear and courage; greed and compassion are all but the varying degrees of the same thing. The difference between them gets determined by the law of vibration. Some emotions vibrate on a higher level whereas others on a lower.

5. The principle of rhythm

This principle explains that there is rhythm between every pair of opposites or poles. Rhythm is the force that enables transition from one pole to another.

Remembering the law of rhythm is very important for your state of happiness and well-being. If you’re used to living in abundance constantly, then times of scarcity will have a much greater impact on you than on someone who hasn’t been as well off.

The key to not being negatively influenced by the harsh pendulum swing is to not get attached to anything in life and not base your happiness on external objects, people or circumstances that lie outside of your control. Mental Transmutation can help greatly when you find yourself caught up in a vibration that does not suit you.

6. The principle of cause and effect

“Every cause has its effect; every effect has its cause; everything happens according to law; chance is but a name for law not recognized; there are many planes of causation, but nothing escapes the law.”

“…Everything happens according to law’ Chance is but a name for law not recognized’ There are many planes of causation, but nothing escapes the law.”

Every cause has its effect and there’s an underlying law that makes it happen. There is no such thing as chance – chance is just a term we use when the exact causes of certain effects are not recognised or perceived.

In practice, we have the opportunity to be the cause not the effect, by being proactive and changing our polarity with the power of our mind and will.

7. The principle of gender

“Gender is in everything; everything has its masculine and feminine principles; gender manifests on all planes.”

Gender is manifested as masculine and feminine principles alike across all planes. There are polar opposites – the yin and yang.

Every person has a biological sex with a male of female physical body. However, psychologically, both qualities exist simultaneously in everyone. The same principle can be found in other things as well – even the brain has a left and right hemisphere that corresponds with respectful gender traits.

Giancarlo is a fully accredited Spiritual Healer, Regression Therapist, and a Consultant Expert Healer of the College of Psychic Studies in London.

He is a Reiki Master Teacher member of the UK Reiki Federation and registered with the Complementary & Natural Healthcare Council. Read more.