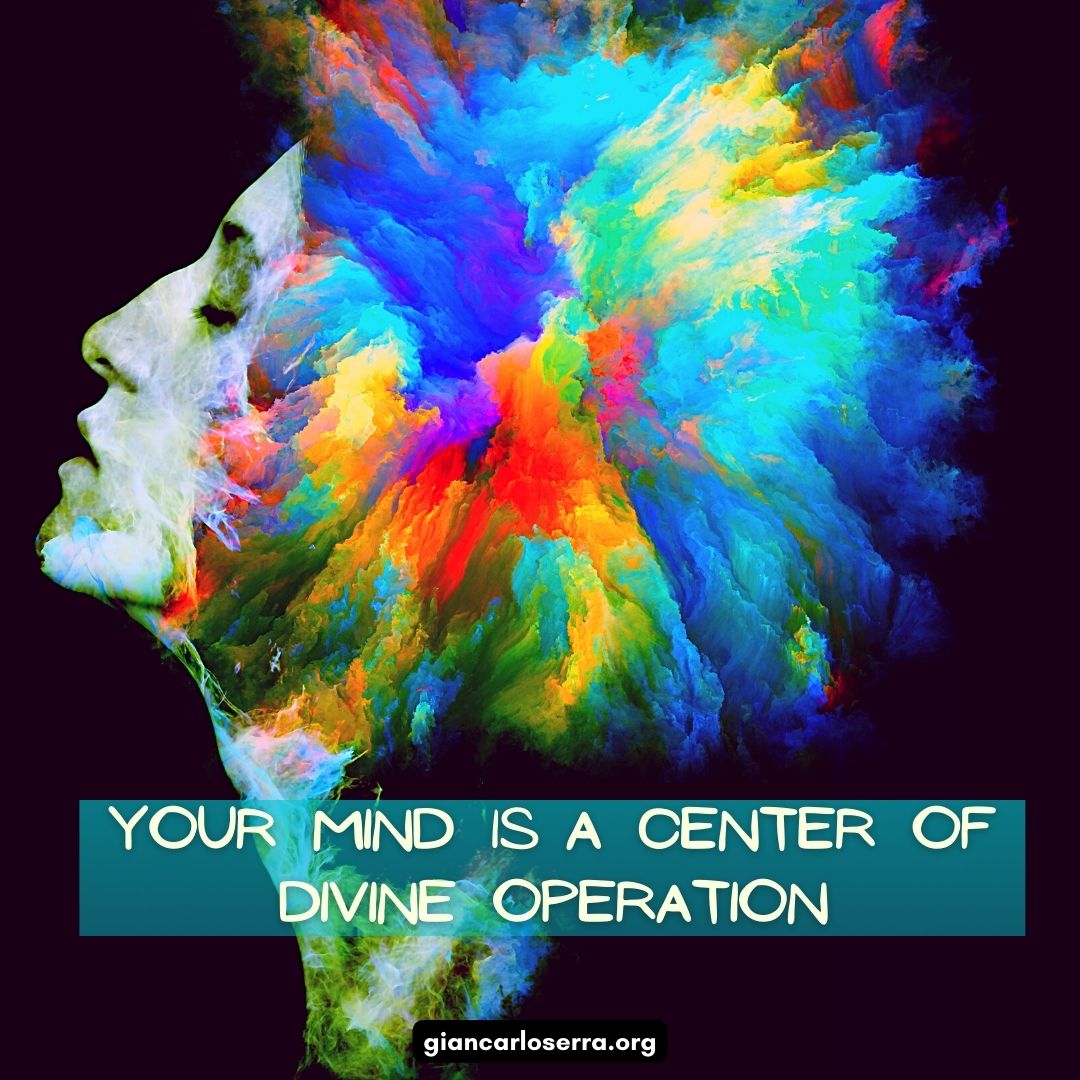 Geneviève Behrend (1881 in Paris – 1960 in United States) was a French-born author and teacher of Mental Science, a New Thought discipline taught by Thomas Troward.

Thomas Troward (1847-1916) was a former judge in the Punjab of British India who in his spare time had studied the world’s sacred books and became a metaphysical philosopher. He was a master, according to Behrend, of “the laws governing the relation on between the individual and the Universal Mind”.

In addition to his celebrated Edinburgh lectures, highly praised by philosopher William James, Troward is best known for his book The Creative Process in the Individual, which argues that the fulfilment of our individual personalities is vital for the evolution of the universe. His thinking was seminal in the emergence of the New Thought movement and Ernest Holmes’ ‘Science of Mind’.

Geneviève wanted to study with Troward, but lacked the money to travel to Cornwall, England where he lived, as she was then living in New York. So every night and morning she visualized counting out twenty $1,000 bills, buying her ticket to London, travelling on the ship, and being accepted as Troward’s pupil.

She constantly affirmed to herself:

“My mind is a center of Divine operation. The Divine operation is always for expansion and fuller expression, and this means the production of something beyond what has gone before, something entirely new, not included in the past experience, though proceeding out of it by an orderly sequence or growth. Therefore, since the Divine cannot change its inherent nature, it must operate i the same manner with me; consequently, in my own special world, of which I am the center, it will move forward to produce new conditions, always in advance of any that have gone before.”

Then, to quote her in Your Invisible Power:

“While these reflections were going on in my mind, there seemed to come up from within me the thought: ‘I am all the substance there is.‘

“Then, from another channel in my brain the answer seemed to come, ‘Of course, that’s it; everything must have its beginning in mind. The ‘I’, the Idea, must be the only one and primary substance there is, and this means money as well as everything else.’ My mind accepted this idea, and immediately all the tension of mind and body was relaxed”.

In about six weeks, she had in her bank the required twenty thousand dollars.

How Geneviève Behrend Became The Only Personal Pupil of Thomas Troward

Geneviève asked a friend to write to Troward as she felt her friend would be able to … ‘couch my desire in better or more persuasive terms than I could employ‘.

To all the letters written by this friend, she received not one reply. However she was not discouraged and remembered the promise:

“All things whatsoever thou wilt, believe thou hast received, and thou shalt receive.”

Her passage to England was arranged, despite the fact that the letters were ignored. Eventually she received a reply, in which Troward said that he did not take pupils, he ‘had no time to devote to a pupil‘.

She was not discouraged, and decided to travel to London. From there she telegraphed Troward, asking for an interview. The telegram was promptly answered, setting a date when he could see her and her friend.

Genevieve went to Troward’s home, in the Southern part of England. He felt much flattered and pleased that she had come all the way from America to study with him, however he reaffirmed that he did not have time to devote to a pupil. He did suggest Genevieve to search for a few books that he felt would be of interest to her.

However, Troward said that she could write to him and perhaps “if I have time in the autumn, we could arrange something, though it does not seem possible now.”

Seek And You Shall Find – The Power Of Determination

“I lost no time in following up his very kind invitation to write. My letters were all promptly and courteously answered, but there was never a word of encouragement as to my proposed studies.”

Finally, about two months later, there came a letter with this question in it: “What do you suppose is the meaning of this verse in the 21st Chapter of Revelation?”

“16. And the city lieth foursquare and the length is as large as the breadth; and he
measured the city with the reed, twelve thousand furlongs. The length and the
breadth and the height of it are equal.”

“Instinctively I knew that my chance to study with Troward hung upon my giving the correct answer to that question. The definition of the verse seemed utterly beyond my reach. Naturally, answers came to my mind, but I knew intuitively that they were incorrect.“

“I began bombarding my scholarly friends and acquaintances with the same questions. Lawyers, doctors, priests, nuns, and clergymen, all over the world, received letters from me with this question in them. Answers began to return to me, but intuition told me not one was correct.“

“All the while I was endeavoring to find the answer for myself, but no answer came. I memorized the verse in order that I might meditate upon it. I began a search of Paris for the books Troward had recommended to me, and after two or three days’ search we crossed the River Seine to the fle de Cite to go into some of the old bookstores there. The books were out of print, and these were the last places in which to find them. Finally we came upon a little shop which had them.“

The man had only one copy of each left, consequently the price was high. While remonstrating with the clerk, my eye rested upon the work of an astrologer, which I laughingly picked up and asked: “Do you think Prof.— would read my horoscope?” The clerk looked aghast at the suggestion, and responded, “Why, no, Madame, he is one of France’s greatest astrologers. He does not read horoscopes.”

“In spite of this answer, there was a persistent impulse within me to go to the man. The friend who had accompanied me in my search for the books remonstrated with me, and tried in every way to dissuade me from going to the famous astrologer, but I insisted. When we arrived at his office, I found it somewhat embarrassing to ask him to read my horoscope.“

“Nevertheless, there was nothing to do but put the question. Reluctantly, the Professor invited us into his paperstrewn study; reluctantly, and also impatiently he asked us to be seated. Very courteously and coldly he told me that he did not read horoscopes. His whole manner said, more clearly than words could, that he wished we would take our departure.“

“My friend stood up. I was at a great loss what to do next, because I felt that I was not quite ready to go. Intuition seemed to tell me there was something for me to gain there. Just what it was I was unable to define, so I paused a moment, much to my friend’s displeasure and embarrassment, when one of the Professor’s enormous Persian cats jumped into my lap. “Get down, Jack!” the Professor shouted. “What does it mean?” he seemed to ask himself.“

“Then with a greater interest than he had hitherto shown in me, the Professor said with a smile: “I have never known that cat to go to a stranger before, Madame; my cat pleads for you. I, also, now feel an interest in your horoscope, and if you will give me the data it will give me pleasure to write it out for you.”

“There was a great feeling of happiness in me when he made this statement, which he concluded by saying, “I do not feel that you really care for your horoscope.”

“The truth of this statement shocked me, because I did not care about a horoscope, and could not give any reason why I was letting him do it. “However,” he said, “may I call for your data next Sunday afternoon?”

“On Sunday afternoon at the appointed time, the Professor arrived, and I was handing him the slip of paper with all the data of my birth, etc., when the idea came to ask the Professor the answer to the question Troward had given me from the 16th verse of the 21st Chapter of Revelation.“

“The thought was instantly carried into effect, and I found myself asking this man what he thought this verse meant. Without pausing to think it over, he immediately replied, “It means: the city signifies the truth, and the truth is non-invertible; every side from which you approach it is exactly the same.”

“Intuitively and undoubtingly I recognized this answer as the true one, and my joy knew no bounds, because I felt sure that with this correct answer in my possession, Troward would accept me as his pupil in the fall.

“As the great astrologer was leaving, I explained to him all about my desire to study with Troward, how I had come from New York City for that express purpose, seemingly to no avail, until the answer to this test question had been given to me by him. He was greatly interested and asked many questions about Troward, and when asked if he would please send me his bill, he smilingly replied, “Let me know if the great Troward accepts you as his pupil,” and bade me good afternoon.“

“I hastened to my room to send a telegram to Troward, giving my answer to the question from the 16th verse of the 21st Chapter of Revelation.“

“There was an immediate response from Troward which said: “Your answer is correct. Am beginning a course of lectures on The Great Pyramid in London. If you wish to attend them, will be pleased to have you, and afterward, if you still wish to study with me, I think it can be arranged.” On receipt of this reply preparations were at once made to leave Paris for London“

From 1912 until 1914 she studied with Thomas Troward; Behrend was the only personal student he had throughout his life.

Your Invisible Power, Genevieve Behrend – Chapter 10 – How I became the only Personal Student of the Greatest Mental Scientist of the Day

> “You are in Barbados!” How Abdullah Taught Neville Goddard the Law

Giancarlo works as a Hypnotherapist, Past Life & Regression Therapist and a Reiki Master Teacher in London, and via Zoom, Skype or telephone.