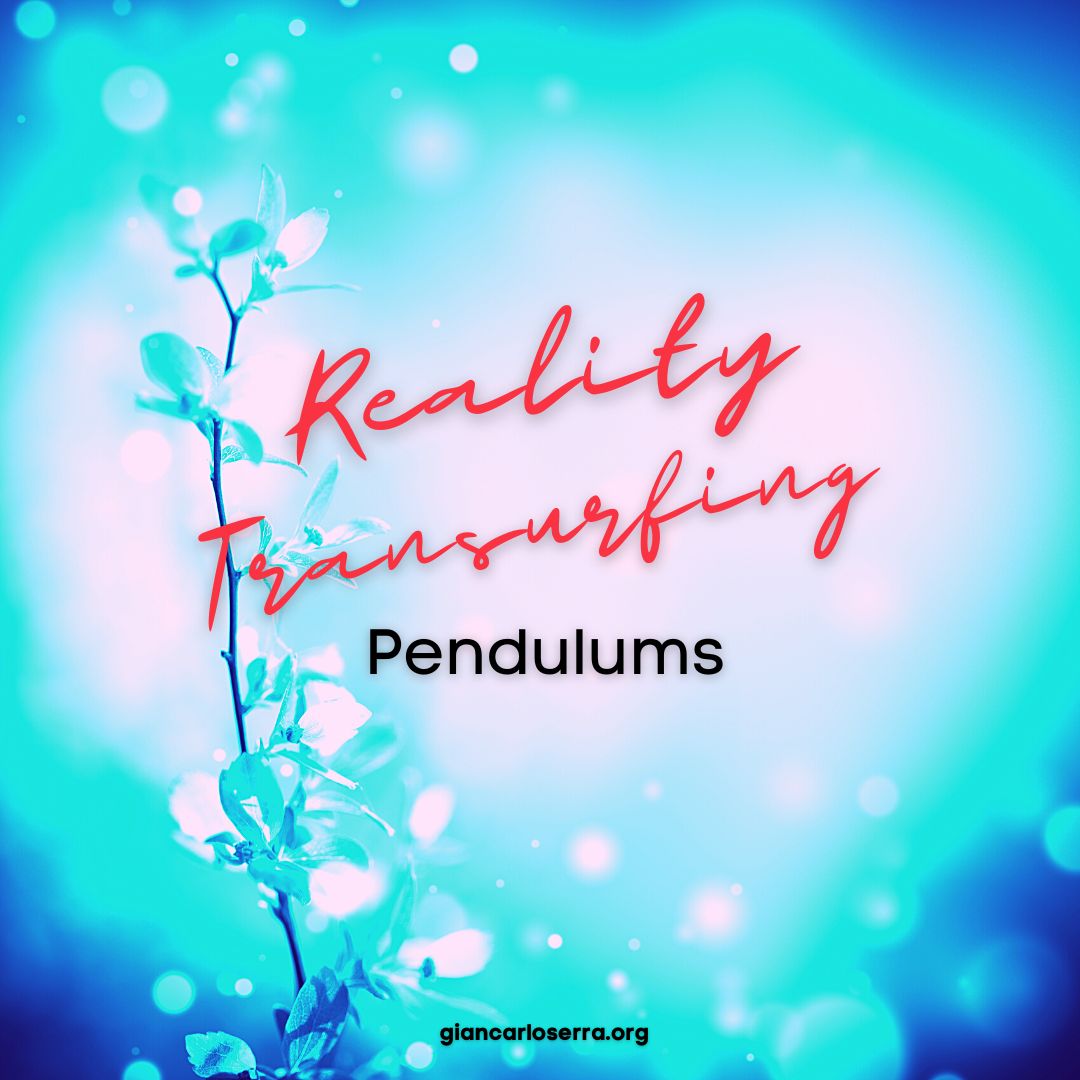 One of the most powerful concepts in Vadim Zeland’s reality transurfing is the pendulum.

Any group that concentrates thoughts of the same vibration will create a pendulum. Pendulums do not necessarily have to represent something detrimental, they can be beneficial and harmful depending on how you interface with them.

You cannot avoid pendulums entirely, they are everywhere. However, you can be self-aware and avoid being oppressed by a pendulum’s influence.

You have to figure out a way to change your mindset and your process of thinking when it comes to pendulums. You cannot sit alone and become afraid of the pendulums in the world. You have to train your mind to deal with them.

You can consciously work pendulums in favour of your own purpose.

Pendulums: What Are They?

In accordance to Reality Transurfing, a pendulum is created by the energy of a group of people thinking in the same way. A pendulum is an energy-based information structure.

People who think in the same direction create invisible energy-informational structures that directly affect us in a daily life.

A pendulum maintains the thought energy of the adherent at its own vibrational frequency.

Essentially pendulum is sort of a “thought condensate” — a soul of a thing, idea, doctrine, organization, ideology or anything that has admirers, supporters, followers, and fanatics.

Basically when a Pendulum is established, it strives to stay alive. Pendulum is energetic structure and it feeds on energy. Therefore it tries to attract as many adherents as possible. As long as the adherents are contributing their thought energy to it, it keeps swinging.

A destructive pendulum forces goals onto its adherents that are not of their own making.

A pendulum plays on human emotion, thereby catching the individual in their web.

“Those starving children in Africa, is it really my fault? Am I responsible?”

“Am I doing enough to help people who are less fortunate than me?”

You feel that you are not the cause of starving children in Africa, and you are doing enough to help people. You feel that you played no (negative) part and contributed positively to any of those things in the physical world.

Neville Goddard says “we transform ourselves in the the likeness of that which we contemplate“.

So, at some level, you are leaking your energy and feeding these invisible energy structures that are behind those global problems/concepts.

Watching the news about poverty and children in Africa may elicit in you the emotional response like anger, fear, sympathy and much more. Your response, and the response of everybody else sending out the same frequency, feeds the pendulum, which is ‘swinging‘ and taking you and everybody else with it.

It doesn’t really matter if you contribute money or how much money you contribute to the poverty in Africa; according to this concept you are hooked to the pendulum’s energy.

It doesn’t matter how hard you fight the government and try to “change” the things the way they are, as long as you keep providing the pendulum your thought energy, it is bound to keep swinging and it is expected that it will feed more reasons to keep you expending your energy to its cause.

So who is at fault here? To a certain extent, we are. Because the only reason that pendulum exist in our lives is that the pendulum is assuming us as its adherent. We are feeding it.

The moment we stop feeding it, or fighting its existence, it will leave us alone.

In my post Understanding Thought Forms And Thought Entities I described some of the concepts presented by Mr Leadbeater and A. Besant in their book “Thought-Forms: A Record of Clairvoyant Investigation“.

In this book, the authors explain how they believe that ‘thought are things” and the book contains colour pictures of visualization of thoughts, experiences, emotions and music, that the authors said are created “in subtle spirit-matter“.

“Each definite thought produces a double effect — a radiating vibration and a floating form. The thought itself appears first to clairvoyant sight as a vibration in the mental body, and this may be either simple or complex. If the thought itself is absolutely simple, there is only the one rate of vibration, and only one type of mental matter will be strongly affected.

Pendulums are in fact thought forms, invisible energy structures of various shapes and sizes. Those with clairvoyant sight can actually see them. Pendulums are probably located in the mental plane, but they can also be found in the astral plane.

There are many different kinds of pendulums.

Pendulums can be religious, political, familial, national or corporate. A pendulum can reveal itself during some massive public event, a football game for example. Many material things that we value start to have pendulums, for example, new iPhone or money.

Once they appear pendulums can put people that created them under control. They don’t have a consciousness. Their sole purpose of existence is to draw energy from the followers.

The bigger the followership that feeds the pendulum with energy the more powerful is the pendulum. If the amount of followers decreases its vibrations die out and it dissipates.

Most of the pendulums have destructive nature because they drain energy from their followers and oppress them. Pronounced examples of pendulums are the pendulums of war, economic crisis, and criminal gangs.

A pendulum opposes its followers to other groups (We are good and they are bad). A pendulum aggressively accuses everyone that didn’t decide to become a follower and tries either to attract or to neutralize/destroy him

Opposing and polarising views in the narrative Vaxxers Vs Anti-Vaxxers is a great example of massive global pendulums.

It doesn’t matter whether you love or hate something, it doesn’t matter if you fight for it or against it. In both cases, you are swinging a pendulum and it becomes stronger by feeding on your energy.

A pendulum doesn’t care if the energy is negative or positive, both work equally well.

The main objective of the pendulum is to hook you up. The means are not important, the goal is to keep you busy thinking about it giving away your mental energy.

The most common method of getting access to your energy by pendulum is disbalancing you. When you lose your balance you start to “swing” on the frequency of a pendulum allowing it to gain more momentum.

A pendulum may control you with fear, inferiority complexes, sense of guilt, and false importance.

For instance, when a pendulum captures your mental energy, your attention in a loop and you tune into its resonance frequency — you get mad, annoyed, feel anger and resent. By doing this you give away your energy at the same time moving to the variation where there is an excess of the things that you are futilely trying to avoid.

You start to have a feeling that things that you afraid of, despise, or hate, chase you everywhere.

What Can I Do?

You can’t fight a pendulum; in fact by fighting it, you will feed its energy. What you fight in your life will keep re-emerging. Life is a mirror that shows you what you need to work on.

There are only two ways to get out of the influence of a pendulum: cause it to collapse or extinguish it.

In order to get rid of a pendulum, first, you need to admit that it exists and it has a right to do so. You have to calm down and lose interest towards it i.e. ignore it. By doing so you will deprive it of your mental energy.

When you are calm and indifferent towards it you can save your energy and use it to transfer to positive variations of life. If you start to get annoyed simply “rent yourself out”, step outside of the situation and become an observer, not an active participant.

Extinguishing of a pendulum requires certain mastery. Basically, you have to start doing offbeat unpredictable actions that will cause a dissonance and disrupt the scenario of a pendulum.

Of course, not all pendulums are destructive. There are many harmless pendulums like a pendulum of sport and healthy lifestyle.

To free yourself from a pendulum means to give it no place in your life. This does not mean to try and avoid it, it means to ignore it.

Become an observer. Being an observer means, you are not putting any emotions into anything. Thus you free yourself from involuntarily contributing to the swing of pendulums that you do not want to associate yourself to. You can’t beat pendulums by playing its game. You defeat pendulum, or at least eliminate the pendulum from your life, by not sticking to the script it wants you to.

When you become an observer, you begin “notice” pendulums.

Let’s say you are sitting in a park a couple walks by. You immediately feel envious and begin imagining various ways why that can’t happen with you. How you always attract wrong kind of people and how you’ve been heartbroken before. So you’re certain that the couple you just saw is going end up splitting up and miserable.

Now, this is where the pendulum plays its game. It, the pendulum being miserable, gets you to expend your energy by making you think the thoughts about how bad your life is.

So what do you do? You observe all the thoughts that go through your mind. You look at it, you acknowledge that you are thinking these thoughts and eventually reacting emotionally.

You do not get involved in criticising the game the pendulum is trying to get you into. You just acknowledge that you were on the verge of playing that game, and choose not to play it.

Choosing to not play the game is to not react emotionally to it.

That is how you detach and rid yourself of the effect of pendulums.

All you have to do is get yourself accustomed to observing your thoughts whenever you’re not doing anything that requires mental concentration.

When you understand “the game” you can consciously choose what pendulums you want to attach yourself to and to what pendulums should your energy go to.

Practical tools to deal with pendulums:

– Understanding the Law of Vibration

– Conscious Use Of Symbols

> Reality Transurfing®: The Way Of Luck